Halle Shooter Stephan Balliet’s Final Statement: ‘The Only Good Thing Jews Ever Invented Was The Holocaust’ 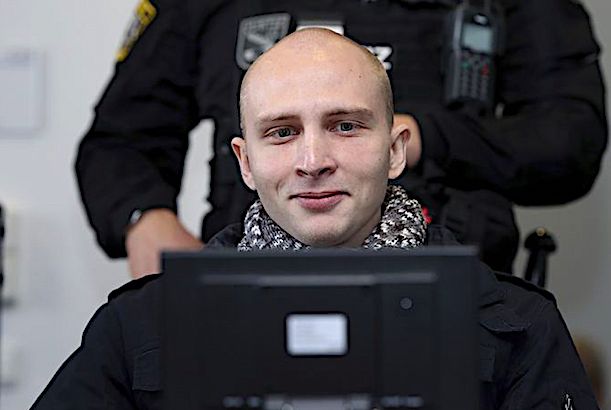 Stephan Balliet, the German man who is charged with killing 2 bystanders in a botched attack on a synagogue in Halle, used his right to make a final statement at his trial to reaffirm one of his primary motivations for the attack — the lie of the Holocaust:

…In his dark anorak, the defendant walks to the lectern with two sheets of paper in his hand; he does not look at the Senate. “This process,” he begins without a greeting, is a “political show trial, a show of force by the ruling elite.” The result was clear from the start – for life and preventive detention – but that would not change his mind.

Balliet supports himself on the desk with both arms, an expansive gesture. He speaks barking, theatrically – a kind of propaganda minister on his own behalf. He turns to the “enslavement” of white Europeans, which can be seen “everywhere”, in cities, train stations, swimming pools.

It takes less than three minutes and then the time has come. Balliet says: “The only good thing that Jews have ever invented was the Holocaust.” The rest is drowned in the turmoil in the hall.

You can still hear him go on, “six million …”, but joint plaintiffs and their lawyers shout in the direction of the court: “Stop this!” And “Make a record!”

“Mr. Balliet, I explained that to you,” Ursula Mertens rebukes the defendants. Freedom of expression has limits and will not allow him to commit crimes in court.

“Then everything is said”, Balliet snaps at her, and sits down again.

Judge Mertens takes the punishable sentence on record, then closes the session.

Every German knows that “freedom of expression has limits” — and those limits are determined by the Jews who rule over Germany today — just as Balliet asserted.

As we reported last year, the draconian Holocaust denial laws in Germany — forbidding anyone from questioning the official Jewish version of World War II — may have contributed to turning Balliet’s frustrations and disenchantment into actual violence.

But the Jewish “holy” book, the Talmud, encourages Jews to lie, especially to the goyim — from the Jewish perspective, lying about the Holocaust is a matter of their survival and therefore justified — it keeps the goyim who allegedly want to kill them at bay.

And it’s not as if the Holocaust was much of a setback for Jews — a 90 year old “survivor” in Israel just sold rental property she bought in Australia 60 years ago for a cool $20 million.

The Holocaust has created more millionaires and billionaires than any other tragedy — real or imagined — in world history.

So of course, the Jews are far more outraged that Balliet continued to deny their “Holocaust” in court than they are that Balliet mistakenly killed two non-Jews in the attack — after the attack Jews in Halle were ecstatic rather than horrified.

Here is a young man who is facing the rest of his life in prison — and instead of groveling to gain sympathy from the court, he chooses instead to take this last opportunity to defend himself by reasserting that the Holocaust is a lie.

And from a Jewish perspective, that was his real crime — not killing two goyim.