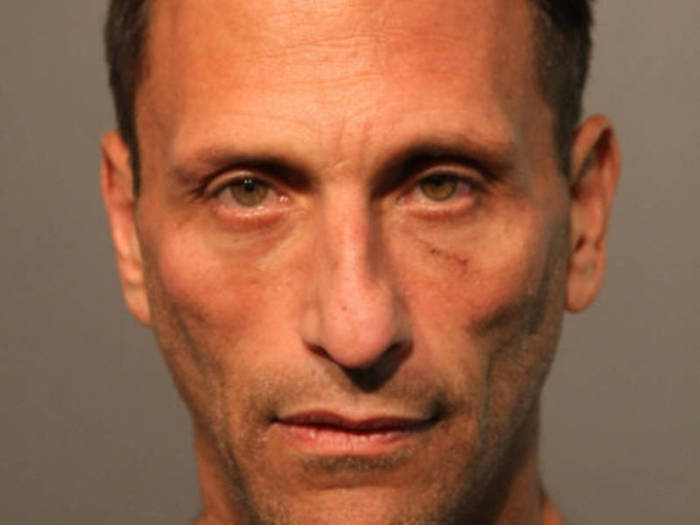 Heath A. Levey, a jewish homosexual, was arrested outside his home in Chicago after police identified him as the man who was earlier caught on surveillance video drawing swastikas in the neighborhood:

An Uptown man who is charged with two counts of hate crime for drawing swastikas on fences and a garage in his neighborhood is Jewish and was arrested five days before the 2016 election for allegedly threatening to rape and kill an Uptown woman who he believed to be a Republican, according to court records and friends of the man who spoke with CWBChicago.

Heath A. Levey, 51, was arrested Wednesday afternoon outside his home in the 4200 block of North Clarendon after police identified him as the swastika- and graffiti-drawing man who had been recorded on surveillance video November 2nd, four days before Election Day.

But friends of Levey on Facebook, contacted by CWBChicago Friday, said he comes from a Jewish family and has been openly gay and a professed Democrat for years.

Court files reviewed by CWBChicago today reveal that days before the 2016 presidential election, Levey was accused of assaulting an Uptown woman and damaging her property.

A 50-year-old woman told police that she looked out her home’s front window around 6:30 p.m. on November 3, 2016, and saw an “enraged” Levey screaming and forcing open her front gate in the 4200 block of North Hazel.

Levey entered the yard, “stomping hard on the ground while menacingly charging” toward the woman’s front door, police said in a report.

Spotting the woman through her front window, Levey reportedly screamed, “I’m going to rape you, you f*cking Republican! I’m calling the CIA. I’m going to kill all the women and children!”

The woman called 911 and Levey fled from the scene, police said at the time.

Prosecutors charged Levey with assault and criminal damage to property and he was served with a no-stalking order to stay away from the victim, according to police records. Levey reached a deal with prosecutors in which he pleaded guilty to damaging the woman’s gate while the state dropped assault charges. He was sentenced to 18 months probation and fined $265 by Judge Clarence Burch.

Levey is now accused of drawing swastikas on a brick pillar in front of a 65-year-old man’s home in the 800 block of West Eastwood and drawing swastikas and references to the CIA on the garage and fence of a 67-year-old woman who lives nearby. He has been served with a no-stalking order to protect both victims, according to police records. The swastikas and other drawings were made around 3:30 p.m. on November 2nd, four days before this year’s election.

Judge David Navarro set bail for Levey at $10,000 and ordered him to go on electronic monitoring if he is released.

If this were a “white supremacist” instead of a gay Jew, his bail would have been over $1 million, and CNN would be “monitoring” the story 24/7.  As we have seen time and again, many of these so-called “hate crimes” are carried out by Jews and other non-Whites hoping that they will be blamed on Whites, and they do this because the Jews have created a system where it benefits them and their anti-White agenda when they perpetrate these hoaxes.  As the old Polish proverb states, “The Jew cries out in pain as he stabs you in the back.”

It’s also worth noting that this deranged Jew has a history of violence toward anyone whom he perceives as disagreeing with him, even elderly White ladies who happen to vote Republican.  All homosexuals are mentally deranged, and rates of domestic violence is much higher among homosexuals than the heterosexual majority, so it’s not really that surprising that Levey would threaten to rape an old lady who disagreed with him politically.  It was sadistic, violent Jews like Heath Levey who orchestrated the Bolshevik revolution in Russia, torturing and killing tens of millions of White Christians.