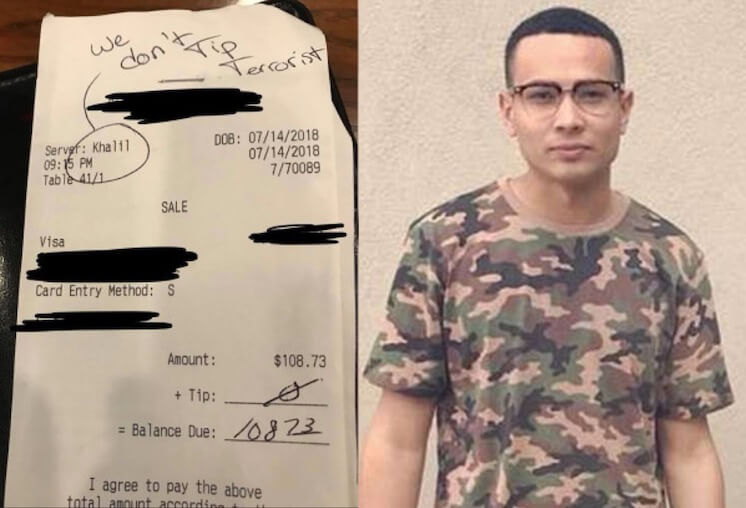 In yet another example of “minorities” creating “hate crime” hoaxes, here we have a Black waiter who was caught lying about White customers who apparently did not leave him a tip and called him a “terrorist”. Unfortunately for him, he was caught in the lie:

The Odessa waiter whose story about being called a terrorist by a customer spurred national attention last week now admits it was all a hoax.

The waiter, Khalil Cavil, 20, admitted he wrote the racist note himself in a Monday interview with the Odessa American, where he apologized to a reporter “because I did lie to you.”

“I did write it,” Cavil said, refusing to explain why. “I don’t have an explanation. I made a mistake. There is no excuse for what I did.”

Cavil’s call followed a press release from Saltgrass Steak House revealing the hoax. Cavil had lied about receiving the note calling him a terrorist while working at the restaurant on July 14.

Terry Turney, COO of Saltgrass, issued this: “After further investigation, we have learned that our employee fabricated the entire story. The customer has been contacted and invited back to our restaurant to dine on us. Racism of any form is intolerable, and we will always act swiftly should it occur in any of our establishments. Falsely accusing someone of racism is equaling disturbing.”

Cavil claimed he was left no tip and that “we don’t tip terrorist” was written on the receipt. Cavil had said he hoped the post would spur conversation “about this hatred that is still going on, that is still here and prevalent. I just wanted people to understand that.”

Right, this poor, misunderstood Black man just wanted to have a “conversation” about all the “hate” going on.

Seems like most of the “hate” going on is coming from Blacks, Jews, and other non-Whites – and it’s being directly solely toward Whites. But no one wants to talk about that.

The White victims here should sue Cavil for libel/slander, and they would win without even having to go to trial – and Cavil can spend the next 20 years paying off the judgment against him. Maybe then he would know what it’s like to work as a “slave” for the White man.