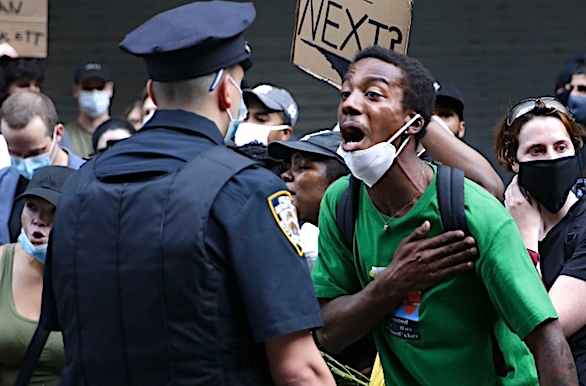 There is allegedly no evidence that the protests which erupted all across America after George Floyd’s death all across America, involving tens of thousands of people, caused a significant increase in US coronavirus infections, according to public health experts:

If the protests had driven an explosion in cases, experts say, the jumps would have started to become apparent within two weeks — and perhaps as early as five days. But that didn’t happen in many cities with the largest protests, including New York, Chicago, Minneapolis, and Washington, D.C.

In what’s considered the first systematic look at the question, a team of economists determined that only one of 13 cities involved in the earliest wave of protests after Memorial Day had an increase that would fit the pattern.

It was Phoenix, where experts say cases and hospitalizations surged after a decision by Gov. Doug Ducey to end Arizona’s stay-at-home order on May 15 and eased restrictions on businesses. Arizona residents who were cooped up for six weeks flooded Phoenix-area bar districts, ignoring social distancing guidelines.

In many cities, the protests actually seemed to lead to a net increase in social distancing, as more people who did not protest decided to stay off the streets, said that study’s lead author, Dhaval Dave of Bentley University.

Drawing from data compiled by Johns Hopkins University, The Associated Press reviewed trends in daily reported cases in 22 US cities with protests. It found post-protest increases in several cities — including Houston and Madison, Wisconsin — where experts say other factors were more likely the main drivers.

Health officials are still investigating case surges in different states, and more data may come in. But experts believe that if the protests did have a big impact on cases, stronger signs would be apparent now…

It’s not clear how many protesters participated, let alone how many of them wore masks or got tested after. That may have varied from place to place…

Another factor: Many people don’t get tested unless they feel symptoms. Many protesters were young adults, who generally are less likely to get severe illness, and therefore may not have gotten tested, experts said.

And some who do get tested may still not answer all the questions they are asked by outbreak investigators.

“I know of three people who told us ‘Yes, I was at a protest.’ That doesn’t mean there was not another 25 or more who did attend a protest and just did not share that with us,” said Dr. Mysheika Roberts, the public health commissioner for the city of Columbus, Ohio.

That city has seen increased cases in the last month, but health officials say they can’t attribute it to any particular reason other than people socializing and returning to normal activities without wearing masks or taking other precautions. So far, protests don’t seem to be a real factor.

“Most of the protests, at least in my jurisdiction, were outside,” and the virus does not spread as well outside, Roberts said. “And I would say 50% of those at the protests were wearing a face mask.”

So, in other words, because the protests promoted a radical Leftist agenda, it couldn’t possibly have spread the virus or put the public at risk.

During the lockdown, all public gatherings were banned, despite the fact that allegedly “the virus does not spread well outside.”

And since the masks, according to a manufacturer’s disclaimer on the box they come in (see below), do NOT protect anyone from coronavirus, why is this even a consideration as part of this “scientific” study?

And most laughable is the contention that the protests forced many people to stay at home, which stopped the spread of the virus, which apparently doesn’t spread well outside anyway.

The message is clear: you will live in fear until further notice. 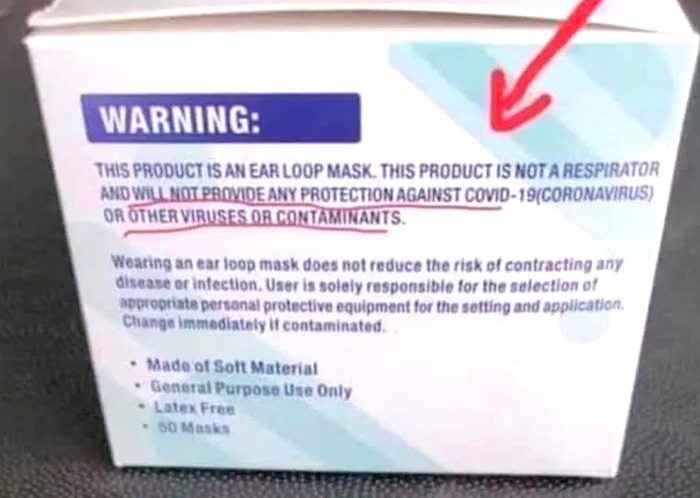