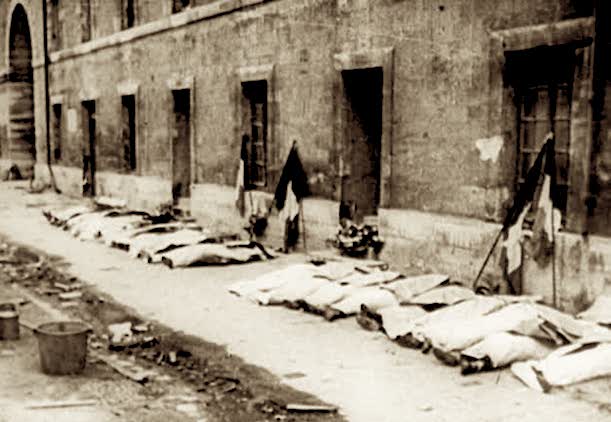 Vandals have scrawled graffiti on a wall in the village that was allegedly the site of the biggest massacre of French civilians by the Nazis during World War II, calling into question the official state-sanctioned version of events:

France’s justice minister vowed on Saturday that those responsible would be brought to justice.

Officials in Oradour-Sur-Glane, near Limoges in central France, threw up a tarp to cover the graffiti discovered Friday on the wall at the entrance to the Center for Remembrance.

The word “Lie” was scrawled on the wall, along with other graffiti, according to the regional paper Le Populaire du Centre. The inscription “Martyr Village” was crossed out.

“Shame on those who did this,” Justice Minister Eric Dupond-Moretti tweeted. “All will be done to find and judge those who committed these sacrilegious acts.”

Troops from the fanatical SS “Das Reich’’ division were responsible for killing 642 villagers on June 10, 1944, herding them into barns and a church and setting the town on fire.

While a new village has been built, the ruins of the old town have been left untouched as a testimony to Nazi horrors.

The massacre occurred four days after the Allied D-Day landings in Normandy. The killings were believed to have been ordered in retaliation for the kidnapping of a German soldier by the French Resistance.

He was officially charged with “approval of a war crime,” which is remarkable considering he concluded that no such war crime took place.

Oradour was a hotbed of French Resistance fighters apparently who used the church in the town to hide their weapons and munitions.

According to Reynouard, while searching the town for a missing German soldier, the Germans separated the men and women — putting the women and children in the church — a fire fight of some kind probably set off the explosion of the cached munitions, killing most of the women and children.

Of course, the French Resistance, merely because they opposed the evil Nazis, cannot be guilty of any war crime — and anyone who questions this paradigm will be criminally charged in France.

Like the Katyn Forest massacre, any act of evil or violence can be blamed on the Nazis — after all, “everyone” knows just how supernaturally — even cartoonishly — evil they were.