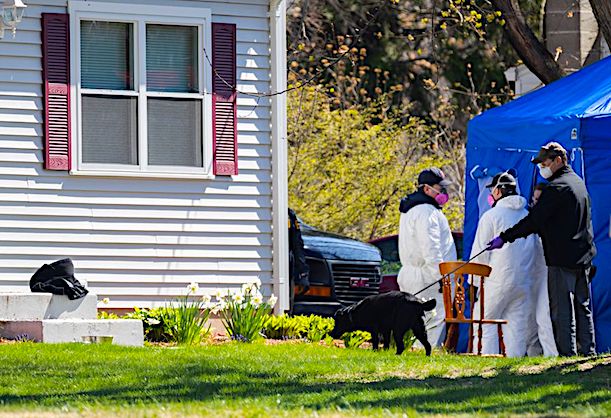 John Michael Rathbun, 36, of East Longmeadow was charged with two counts of attempted arson after local police found a 5-gallon plastic gas container with burned paper placed in the nozzle of the canister outside the assisted living home on April 2, according to a criminal complaint.

The burned paper was a Christian religious pamphlet, and blood was on the side of the gas canister and the paper, the FBI said.

The blood is alleged to have matched Rathbun’s DNA, which had been stored in a federal database because of his 2011 arrests on charges of breaking and entering and receiving stolen property.

Investigators discovered a white supremacist organization on a social media platform in March targeting “the jew nursing home in longmeadow massachsusetts,” according to the complaint written by Special Agent Ryan McGonigle, assigned to the FBI’s Joint Terrorism Task Force.

The FBI didn’t name Rathbun specifically as the person who made the posts.

Court papers did note that the online user who discussed the nursing home, identified in court papers as Ruth’s House on Converse Street, also said April 3 would be “jew killing day.”

Rathbun is alleged to have put the device at the entrance of Ruth’s House on April 2.

Part of the pamphlet used in the explosive “was charred and appeared to have been lit on fire in an attempt ignite the gas,” McGonigle wrote.

Rathbun initially denied the allegations, investigators said. But when investigators told him about the DNA evidence, his “demeanor visibly changed, and a short while later, he stated that he did not know what he was going to do and that he wanted to cry,” according to the complaint.

Federal agents said they discovered gas cans at Rathbun’s home and cuts on his hands. They also found that the suspect’s methadone clinic is on the same street as Ruth’s House, the complaint said.

It wasn’t immediately clear whether Rathbun had hired an attorney.

“This case highlights the very real threat posed by racially motivated violent extremists and make no mistake, the FBI will use every investigative tool available, along with the expertise and skills of our partners on our Joint Terrorism Task Forces, to identify, assess and disrupt threats like this one to keep our communities safe,” according to a statement by Joseph Bonavolonta, special agent in charge of the FBI’s Boston field office.

Despite the smears and innuendos, there is no concrete evidence here that this heroin addict was motivated by ‘antisemitism’ or ‘hate’ in his apparent pathetic attempt at setting this nursing facility on fire.

The FBI admits they have no proof that Rathbun is in any way connected to the previous threats made online to this nursing home.

But notice how they made sure to point out that the paper he used to attempt to light the gas can was allegedly a “Christian” religious pamphlet — the suggestion being, of course, he was somehow ideologically motivated.

More likely, he got the Christian pamphlet at the methadone clinic as part of his therapy, but instead of reading it, he used it as a makeshift fuse.

And yet this failed attempt at arson is being investigated as a ‘hate crime’ and ‘domestic terrorism’ until proven otherwise.

These investigators have magically turned a strung-out heroin junkie who breaks into people’s houses to support his habit into some kind of Christian ‘white supremacist’ who is part of a coordinated conspiracy to commit ‘domestic terrorism’ against random people at a jewish nursing home on the same block as his methadone clinic.

The public is being brainwashed by the Anti-Defamation League into believing that White Christians are the new ISIS or Al Qaeda, secretly forming ‘international’ terror cells to target Jews and other people of color just out of blind ‘hate’.

And even if Rathbun were a ‘white supremacist’ who wanted to burn down this jewish nursing home, what exactly was he hoping to accomplish by this random act of violence?  Does he not know that many of the elderly at these ‘jewish’ nursing facilities are often not jewish?

How is targeting elderly Jews somehow going to make any rational person sympathetic to your worldview?

Anyone who thinks that way needs serious psychiatric help much more than just a methadone cure.