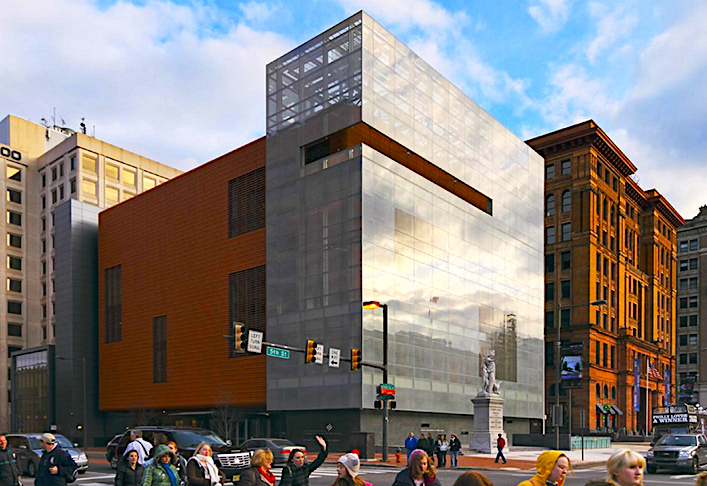 The National Museum of American Jewish History filed for Chapter 11 bankruptcy protection Monday, seeking relief from what museum officials characterize as a crushing debt burden incurred by construction of its home on Independence Mall a decade ago:

In papers filed with U.S. Bankruptcy Court in Philadelphia, the museum said that it owed a little more than $30 million to bondholders and about $500,000 to unsecured creditors.

“Our museum, since it’s open, has been lugging around over $30 million of debt, and it is a weight on our shoulders that we have to get rid of,” Phil Darivoff, chair of the museum’s board of trustees, said. “It affects the way donors look at us. It affects our confidence in our future. And frankly, the debt service is too big a burden for us.”

Officials said that the bankruptcy proceedings would not affect museum operations or staffing.

“The museum has more debt than it can sustain,” Lawrence McMichael said. “And that has a lot of negative implications for a nonprofit. It’s really no different than other nonprofits I’ve taken through Chapter 11 in Philadelphia, in the sense that what happens when a nonprofit has more debt than they can reasonably ever repay, donors start to get cold feet and they back off of it.”

That, he said, fuels “a proverbially vicious cycle, and the only way to deal with it, ultimately, is to resolve things through a Chapter 11. That’s what Chapter 11 is there to do.”

The museum is known for its unusual, sometimes quirky, exhibitions, everything from a big overview of Leonard Bernstein in 2018 to Ruth Bader Ginsburg and “Sara Berman’s Closet” in 2019….

Darivoff said that the museum has been paying about 20% of its budget in interest payments every year. The decision to file for bankruptcy was prompted by the expectation that it would lead to “a reduction in debt that will create a new level of sustainability.”

…In August of last year, the museum did not pay the interest obligation on the bonds, according to court records. The bank countered with a demand for immediate repayment of the full amount.

…Court records describe the situation dryly: “Since opening in 2010, the museum’s revenues from gate receipts and events have not reached the levels expected.

Given such problems, Darivoff was asked if the institution regretted the move out of its manageable quarters behind Mikveh Israel into the big six-story show on Independence Mall.

“The group of people in Philadelphia who recognized the need in the American Jewish community to tell the story of Jews in America in a way that couldn’t be done in a one-room museum, I think was an act of great leadership,” Darivoff continued. “Telling history is central to the Jewish people. It’s central to who we are. We are a people in part because of the way we retell our history. Our Bible is, in fact, a recitation of the history of the Jewish people. And we stay together as a community by retelling that history.”

Except that nobody else is interested in jewish history, especially in a massively Black city like Philadelphia.  It’s doubtful even that most Jews in Philadelphia have any interest in seeing an exhibit on Ruth Bader Ginsburg.

In fact, over 75% of the museum’s visitors are jewish, and most of those are elderly Jews.  No wonder it’s going broke.

America succeeded not because of its Jews but despite its Jews, and that’s a bitter pill that very few Jews are willing to swallow.

If Jews had the power they have today back when the Constitution was being written, the country would have self-destructed from internal conflict before it ever got off the ground.  By their own admission, they are destroyers, not builders.

“We Jews, we are the destroyers and will remain the destroyers. Nothing you can do will meet our demands and needs. We will forever destroy because we want a world of our own.”
— Maurice Samuel, “You Gentiles” (1924)

And once this folly of a museum get this foolishly conceived debt thrown out by the court, they can turn around and hit up more old Jews to keep this doomed leviathan going, or that’s the plan.

After all, where America be without Jews having a place to ‘tell their stories’ — their tall tales of alienation, persecution and ‘triumph’?