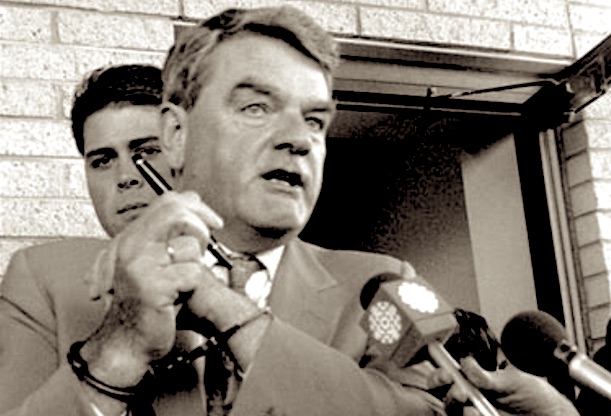 In this video from a book tour in the 1990s, British historian David Irving explains how he had come to the conclusion that the Hungarian Uprising of 1956 had actually started out as an anti-Jewish pogrom, and how this factual conclusion had so offended a group of Jews at one of his lectures that they tried to shut him down.

Irving’s response to the disruptive Jews goes right to the heart of “The Jewish Question,” a question that they collectively refuse to ever ask, and even more certainly will always refuse to answer:

A book I wrote in about 1975 was….the history of the Hungarian Uprising against the communist occupation of Hungary, for which I had access to a certain number of C.I.A. files, which are very interesting because the C.I.A. carried out in-depth psychological interrogations of a large the Hungarian refugees who came to this country after 1956.

And there was no doubt in my mind, a very interesting discovery indeed, which I wasn’t aware of until I began investigating that. I didn’t realize this. The reason I began writing a book about the Hungarian Uprising was entirely irrelevant. I decided to write a book about something other than Hitler and the Third Reich just to show that I wasn’t in a rut.

But the odd thing was when I began writing that book, I discovered from the C.I.A. files that the Hungarian people, when they started that uprising, it began as an anti-Jewish pogrom. It was essentially an anti-Jewish revolution, not an anti-communist revolution to begin with for the first few days.

The Hungarian people regarded their government in the 1950s as being a jewish government, and they regarded the secret police, the dreaded [AVH] as being a jewish secret police, and essentially it was because when the Red Army entered Hungary in 1945, they brought back into Hungary all the Jews who had taken refuge in the Soviet Union, and they were the ones who got the plum jobs, and they were the ones who got the trustworthy jobs, the secret police chiefs and the torturers.

And that’s why the Jews were so hated in Hungary by 1956 because they were regarded as the people who had inflicted this nameless misery on the Hungarian people, and so the Uprising began as an anti-Jewish uprising.

Every one of the ‘Hungarian’ leaders at that time in 1956….they were all Jews, and I never realized that when I set out to write it. It was an extraordinary fact the way these things are kept away from the public consciousness.

And, of course, when the book came out, I was accused of ‘antisemitism’, but what am I supposed to do when you discover something, as a historian, are you supposed to pretend that it isn’t that? And if you do pretend that, you are doing the Jewish people more harm than good, I think.

I know — I said to this Jewish mob in my audience  — that I am disliked, and I know why I’m disliked. Now you people have been disliked for 3,000 years. Do you ever look in the mirror and ask yourselves why you are disliked?….They never ask themselves that question, do they?

He was the leader of the [disruptive Jewish gang in the audience], and he said, “Are you accusing us? Are you saying that we are responsible for Auschwitz ourselves?” And it was a bit of a dazzling question, and I said, “Well, the short answer is yes.”

But that’s a cruel answer because to do the question justice, you’ve got to have a lot of intervening stages, of course. But the short answer, if you want to hop from A to Z, is yes. If you hadn’t behaved the way you have as a race for 3,000 years, first the Russians, then the Poles, then the Galicians, then the Austrians and the rest wouldn’t have harried and hounded you from pillar to post so you end up finding yourselves at Auschwitz. And you’ve never asked yourselves, “Why?”

Hard copies of David Irving’s book on the Hungarian Uprising have become very rare and expensive, but you can download it here for free.