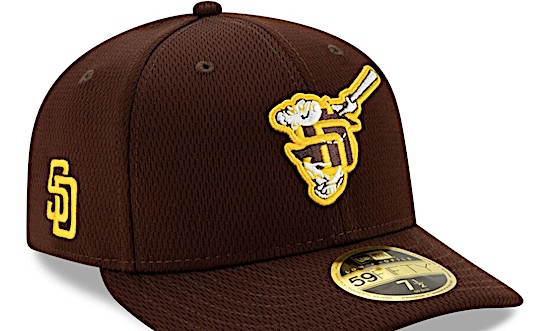 The San Diego Padres’ new spring training cap unveiled last week will only be worn briefly following an outcry from unhinged Jews who somehow think the logo looks like a swastika:

“Following our offseason uniform rebrand and the overwhelmingly positive response from Padres fans, we’ve decided to wear our regular season brown caps with the gold ‘SD’ for the majority of spring training,” Wayne Partello, the team’s chief marketing officer, said in a statement, the San Diego Union Tribune reported.

Partello did not mention the controversy over whether the logo on the spring training hats looks like a swastika.

The caps will be worn at least once since the team has been selling and promoting the hat with the logo to fans as on-field equipment, CBS Sports reported. They are also part of a general series from Major League Baseball and New Era that combines the logo of each team with their letter logo.

They grow up believing that at any minute the irrational ‘gentiles’ will turn on them for no reason whatsoever, pick up pitch forks and torches, round them up and put them in ‘gas chambers’ disguised as showers, then kill them with a common household insecticide.  Nowhere is safe.

It’s gotten so bad that if you hyphenate ‘anti-Semitic’, you’re probably an ‘antisemite’.

This is the kind of effect that the “Holocaust” has on many fragile jewish psyches.

Fortunately, there are many Jews who have broken free from this brainwashing and are now trying to warn other Jews of the psychological dangers of Holocaust propaganda.

But for those Jews who can’t break free, the only way they know how to deal these paranoid fantasies is to completely disarm the goyim and make it illegal, under threat of prison, to say anything critical of Jews for any reason whatsoever.

And if you try to reassure Jews, using objective historical facts, that this Grimms fairy tale called the Holocaust didn’t actually happen, and that every single gentile isn’t a potential antisemitic genocidal maniac, instead of thanking you, they will have you thrown in prison for ‘hate speech’.