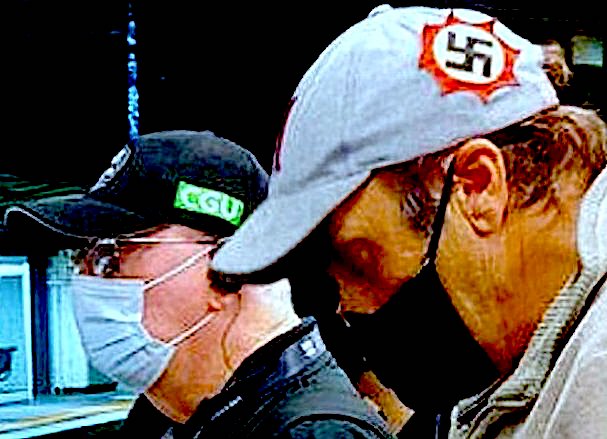 One of Australia’s top Jewish supremacist organizations expressed “shock and anger” on Sunday after a man in Melbourne was spotted — and photographed — wearing a hat with a small Nazi swastika symbol on it:

The man was photographed by a 23-year-old Jewish man who is a descendant of Holocaust victims.

It is believed that the man wearing the hat may have been heading home from a soccer game that had finished that evening.

A three-year campaign has been underway in Australia to ban the swastika by law, with the support of the Anti-Defamation Commission (ADC), a leading Jewish-Australian group. A parliamentary committee from the state of Victoria issued a report this month recommending such a ban, and the government appears to be leaning toward enacting one.

ADC Chairman Dvir Abramovich, said of the incident in Melbourne, “If the Victorian state government does not put an end to this sickening and escalating crisis right now, Victoria may become known as the Swastika state instead of the Garden State.”

“From the special spot in hell reserved for such monsters, Hitler must be smiling, knowing that his followers are continuing his destructive legacy,” he asserted.

“We should not have to wait until white supremacists organize a rally and march down Swanston street waving Nazi flags before acting,” he said. “Our city is being invaded by these agents of hate, by these ‘Final Solutionists’ who are spitting in our faces and who have no fear of proudly exhibiting this evil emblem, which represents the extermination of millions, knowing full well that the law is on their side. Our diggers who sacrificed their lives to defeat the Third Reich must be turning in their graves.”

“No one can feel safe when such terrifying episodes are allowed to happen,” Abramovich said. “Imagine the sheer terror a Holocaust survivor would have felt seeing this unrepentant bigot. I repeat my call for the state government to draft a bill that bans the public displays of Nazism and to pass the law immediately. Enough is enough.”

We’ve reported on many of the hysterical outbursts by Dvir Abramovich — a racial agitator and head of the Australian version of the Anti-Defamation League — a Jewish supremacist organization.

Abramovich has admitted that when he and his fellow Jews attempt to “combat” antisemitism, they merely end up creating even more antisemitism — and this story shows why.

Two years ago, Abramovich claimed that antisemitism was “spreading like wildfire” across Australia — and he’s doing his best — using his emotional and inflammatory rhetoric — to make sure that it does — or at least the fear of it does.

Last year, Abramovich became highly agitated when White activists in Brisbane posted fliers letting the Jews knows that they “knew what they were up to” in Australia — causing him to hysterically predict Jews would “soon” be “physically assaulted” and even “murdered” in the streets.

No violence against Jews has been reported, of course — but that hasn’t stopped Abramovich to continue to cry wolf.

But Abramovich has certainly succeeded in terrifying his fellow Jews — when a Jewish woman happened to see a swastika on someone’s front gate in Queensland last year, she was so “traumatized” that she demanded that the police charge the  homeowners with “incitement to commit murder.”

If anything should be banned, it should be Holocaust propaganda, which is seriously traumatizing Jews worldwide, making them think they are seeing subliminal images of Hitler and Nazis everywhere they look.

Jews already have a pronounced proclivity toward mental illness — and being bombarded with non-stop Holocaust propaganda and fear-mongering will only serve to set many of them off the deep end.

This abuse of Jews has to stop.