Homicidal Schizophrenic Jew Andrew Goldstein To Be Released From Prison 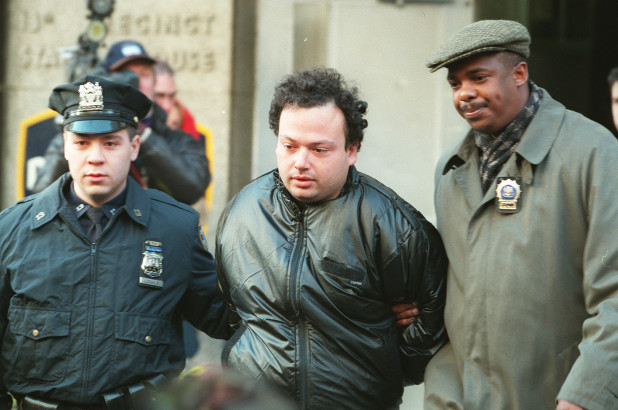 In 1999, a psychotic Jew named Andrew Goldstein pushed a woman in front of a Subway train in New York City, killing her instantly.  He is going to be released from prison later this month for “good behavior”:

It’s not easy being an overweight, balding, Jewish schizophrenic living among the SMI-Vs of the New York prison system. During his 19 years, 16 of them in the state’s flagship prison mental ward at the Sullivan Correctional Facility, and most recently in Sing Sing, Andrew has been teased and bullied by the high-functioning mental cases.

Everyone inside seems to know at least the tabloid outlines of his crime. In January 1999, suffering from schizophrenia and given to explosive violence when off his medication, Andrew, then 29, pushed a 32-year-old receptionist into the path of an oncoming N train at the 23rd Street subway station.

After two trials and a plea bargain, Andrew was sentenced to 23 years in prison. With time off for good behavior, he is scheduled for release on Sept. 14.

…[Prior to the murder] Goldstein had been hospitalized 13 times—voluntarily—and each time he was medicated and discharged to live alone in a squalid basement apartment. Social workers assigned to his case tried to place him in state hospitals, in state-financed group homes, in single-room-occupancy hotels staffed by counselors, in the care of intensive-case managers. Always they encountered long waiting lists, lengthened by severe budget cuts under Gov. George Pataki.

A few months later, Pataki earmarked an extra $125 million for the care of the mentally ill. He also signed Kendra’s Law. Officially known by the euphemism Assisted Outpatient Treatment (AOT), the law establishes a stringent outpatient regimen for those who are mentally ill and have a history of resisting therapy and a record of violent behavior.

A treatment plan is imposed by court order and monitored by a case manager or “Assertive Community Team.” A patient who refuses to follow the program can be committed to a hospital for up to 72 hours. More than 16,000 New Yorkers have passed through AOT since the law took effect, and some 3,000 New Yorkers are currently living under AOT court orders.

…The prosecution’s expert, Dr. Angela Hegarty, argued that Andrew was a “relatively mild” schizophrenic and his symptoms were “substantially in remission.” A psychopath with a resentment of women—that was the real Andrew, a conclusion that Hegarty reached, she told the jury, by conducting interviews with people who had firsthand knowledge of him.

None of these new laws or programs address the real problem — that Jews suffer from mental illness, especially schizophrenia, at much higher rates than the general population, and they are a potential danger to the rest of us — diagnosed or not.  And no laws or programs will protect us from the Goldsteins of the world.

Since Jews dominate the so-called mental health field, it’s like letting the fox guard the hen house.  They define typical jewish behavior as “normal,” and then they are allowed to live freely until something goes terribly wrong.  And these psychopaths are clever enough to tell their jewish “doctors” exactly what they want to hear to convince them that they’ve “learned their lesson.”

If all Jews would voluntarily move to Israel — and fulfill the jewish dream — then none of these mental health laws would be necessary.  This would be far more humane than pumping them full of drugs for 20 years while they rot in prison.