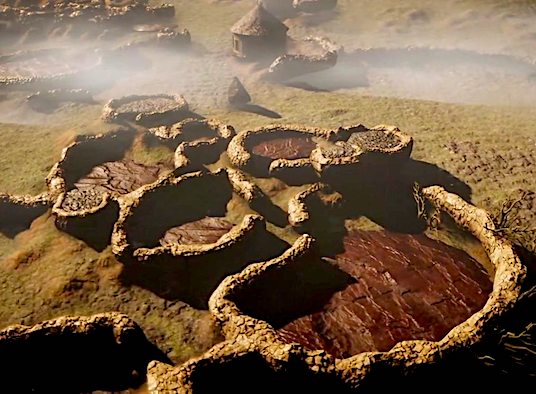 What was once thought to be a scattering of ancient stone huts on the outskirts of Johannesburg, South Africa, has been transformed into a “thriving city,” lost to history for 200 years, thanks to White technology and White archeologists:

Beneath the dense vegetation, there isn’t much to see with the naked eye. And after three decades of careful research, archaeologists in South Africa have barely scratched the surface of this long-lost settlement.

Now, however, thanks to the cutting-edge laser technology of LIDAR (Light Detection and Ranging), this site has been revealed for what it truly was: a veritable metropolis, made up of hundreds of households and trade networks.

The research has brought this city, called Kweneng, back to life. Home to a Tswana-speaking ethnic group, Kweneng’s 800 homesteads are now thought to have housed no less than 10,000 people.

“What this means is filling in a huge historical gap, especially for southern Africa, because we know pre-colonial history of southern Africa has no written record,” explains Fern Imbali Sixwanha, an archaeologist at the University of Witwatersrand involved in the research.

“So now we’re starting to fill in the gaps using this LIDAR technology.”

Bouncing billions of laser light pulses off the lower western slopes of the Suikerbosrand hills near Johannesburg, the researchers were able to virtually ‘see’ through all the vegetation and preconceived notions that have obscured this once bustling city.

Studies now reveal that Kweneng, which spanned about 20 square kilometres (8 square miles), was at its prime between the 15th and 19th century. And in its heyday, the researchers think it was probably a rich and thriving city.

Several pairs of parallel rock walls suggest there were numerous passageways into the city, many of which look like cattle drives, built to herd cows and other livestock through parts of the city.

What’s more, in the middle of Kweneng are remnants of two massive enclosures, which together take up a space estimated at 10,000 square metres (108,000 square feet). Archaeologists on the case think these may have been kraals that housed nearly a thousand head of cattle.

But just like many other Tswana cities, this one is also thought to have fallen into decline after civil unrest.

Gone are the citizens, the stone towers, the homesteads, the livestock, the wealth. Thanks to LIDAR, however, the history will live on.

Blacks can’t falsify history on their own, so mostly White do-gooders are more than happy to do it for them, and in this case, using sophisticated 3-D computer modeling.

Judging from these computer-generated pictures, what we are looking at is not, in fact, a “city” by any White standards — by White standards it can only be no more than a collection of stone huts and animal enclosures, but by Black standards, that’s the equivalent of ancient Rome, one would think.

But this is just one example of how far Whites are willing to go to make Blacks feel like they’ve accomplished something in their collective past that’s worthy of anyone’s attention.

As the article above freely admits, prior to White colonists, there was “no written record” anywhere in sub-Saharan Africa.

With no written language, the Africans had no way of transmitting their history or “culture” from one generation to another.

Whites had to teach Africans how to read and write in their own languages, and now they are teaching them to make up a history that never happened, just so Blacks can feel better about themselves.