How Black Africans Are Taking Over ‘Christianity’ In England And Ireland 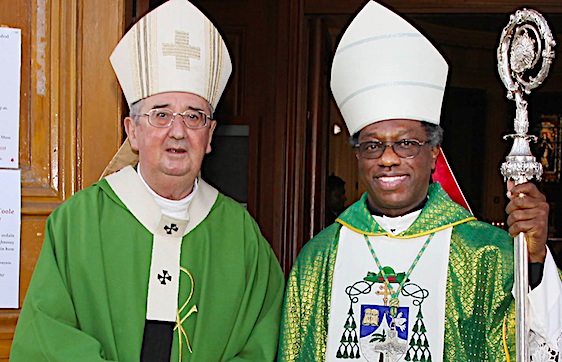 England and Ireland have the largest and fastest growing populations of Africans in Europe, and Black missionaries from Africa are converting them to ‘Christianity’ at such a rate that they now comprise the majority of Christians in many cities:

Africa was once known as the “Dark Continent,” but Europe may deserve that label now. A majority of African nations today are Christian. A majority of Europeans say they are now either atheist or have “no religion.”

In the past 20 years, church buildings have been shut down by the thousands and put up for sale.

But Europe is being re-evangelized just like early European missionaries to Africa and Asia had prayed for back in the 1800s.

He says what early missionaries had prayed for something called “the blessed reflex.”

“That there’s going to be a reflex in the future when Christians from Africa, from Asia would come back to strengthen British or European Christianity,” he said.

And today, dynamic Bible-believing immigrant churches can be found in virtually every European capital.

“In London, on any given Sunday, over 60% of people who attend church are black Africans going to African Pentecostal churches,” Kwiyani said.

African heritage Britons, just 14 percent of London’s population, now account for over half of the city’s church attendance.

After Ireland made a radical turn away from the institutional catholic church to secularism, there is now fresh fire, thanks to Christian immigrants known as “the new Irish.”

Pastor Tunde Oke oversees the Nigerian-based Redeemed Christian Church of God in Ireland, which now has more than 100 churches.

“The Irish came to Africa many years ago and did so much. They didn’t just bring a religion, they brought a better life…schools, hospitals, and all of that,” Oke said, “and the Africans are bringing it back here. And for us to come back to Ireland and to see Ireland in the state that it is in, it encourages us to do a whole lot more.”

…Pastor Sean Mullarkey of St Marks in Dublin says there are now church plants all over Ireland because of the immigrants, “in little rural towns that could never have been reached if it wasn’t for the fact that God has brought in these people. They’ve become these new Irish.”

And Kwiyani believes this new movement in Europe “will redefine what it means to be a missionary in this century.”

“Somehow God has a sense of humor,” Pastor Oke said, “because now that things are becoming a lot more secular, God is bringing the harvest back to the people who brought Jesus to us.”

This has nothing to do with God’s ‘sense of humor’ and much more to do with His anger toward the English and Irish who have turned their back on Him.

Yes, the Catholic Church did a brilliant job to ensure that the Irish would turn their backs on Christianity, but the Protestant churches have done their share in making a mockery of true Christianity as well.

And God will use these African migrants — and all other racial aliens —  in England and Ireland as ‘rods of chastisement’ to punish His true children for turning away from Him.

And yes, as our White European lands become flooded with these racial aliens, it better re-Christianize our people because that’s the only thing that is going to save us from being consumed by them.

But the English and Irish don’t need missionaries from Africa to re-Christianize them.  The Irish have known who the one true God is for the last nearly 2,000 years.

There’s a reason that the Lia Fail, Jacob’s ‘stone of destiny’ was in Ireland.  The Irish legend has it that Jeremiah brought the stone of destiny to Ireland along with Israelites to marry into the Irish nobility.

There’s a reason that the term “British” comes from the Hebrew “B’rith” and “Ish” or “People of the Covenant”.

It’s time to rediscover who they really are and ask God to return to them.