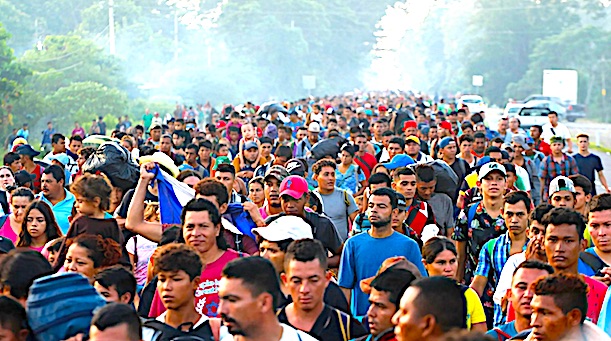 Here we present Bertrand Comparet’s essay, God’s Immigration Laws — which he apparently wrote in the late 1960s when the U.S. Congress passed new, treacherous immigration laws that no longer gave priority to immigrants from White Christian nations but rather favored immigrants from non-White Third World countries — opening the floodgates for the intentional browning of America.

And we know from the meticulous research of Professor Kevin MacDonald, in his essay, “Jewish Involvement in Shaping American Immigration Policy: 1881 – 1965,” that powerful Jewish groups were behind these changes — to undermine what they perceived as their most hostile enemy — White Christian America.

If the Jews were truly descendants of the Israelites that they claim to be — and obeyed the Bible — they would have very vocally denounced these changes to the immigration laws instead of enthusiastically supporting them.  At the time — and since then — only conservative Whites — mostly Christians — have vocally protested these draconian changes to the laws designed to protect their race and posterity.

Since those changes to our immigration laws, in only 50 short years America has gone from 95% White to less than 60% White — and even those numbers are probably being generous, considering the U.S. Census considers many Latinos, Arabs, and Jews as “White” — in all probability Whites are now a minority in their own country.

And, of course, it would be very easy to merely blame the Jews for this treachery — as most White Nationalists are wont to do — but that only serves to exonerate ourselves from our own failures — our disobedience to God — when He clearly spelled out in Scripture what the consequences would be to us for that disobedience.

Jews flood White nations with non-Whites because it is in their best interests — and to expect them not to do it is extremely naive.  They have successfully cowered White America to go along with it — using their greatest propaganda tool — the television — making them fearful of smeared as “racists” — even though it is inimical to our survival — and contrary to God’s law.

Christians are more fearful of Jews calling them “racists” than they fear the judgment — and punishment — of God.

Most people who identify as “Christians” cannot understand this crucial point because they do not recognized that people of the White race are indeed the legitimate physical descendants of the ancient Israelites — and without this understanding, the Bible does not offer any explanation for the tribulations that White America are now experiencing — nor a plan for effective change outside of the political area.

You can listen to the audio version Comparet’s essay below following our transcription.

When I first spoke to you on the subject of the laws of God, we saw that God’s laws are divided into four classes — commandments, judgments, statutes and ordinances.  That the commandments are the major rules governing man’s duties to his God.  The judgments are the rules governing man’s relation to other men.  The statutes are the general rules for the health, prosperity, and peace of the nation — including the dietary and agricultural laws, the social and economic laws, and the political laws.  And finally — the ordinances are merely the religious regulations for the various rituals and sacrifices and offerings.

Of these none but the ordinances have been set aside by the New Testament.  The rituals and symbols embodied in the ordinances were the expression of the Israelite’s belief that his Redeemer would come in the future.  But when Jesus Christ had actually come and performed the reality which these rituals symbolized, their usefulness was then ended.  The believer could no longer say that he was waiting for the future coming of his Redeemer — that would be a repudiation of Jesus Christ who had already come.

So these ordinances must be replaced by new rituals which looked back to the accomplished redemption.  But the other laws of God are still in force — thou shalt not steal, and thou shalt not commit adultery are still as important today as when Moses carried the stone tablets down Mount Sinai. We do not expect to gain our personal salvation by keeping the law — and indeed this was never their true purpose.  But we do expect to gain the peace, prosperity, and good order of the community thereby — just as we have tried to do this by enforcing the laws of our city, our state, and our nation.  Let no one be misled into thinking that God’s commandments, judgments, and statutes have been set aside by the New Testament — these are permanent laws.

In Matthew 5, verse 48, Jesus Christ tells us that God is perfect — naturally so are His laws.  The nineteenth Psalm tells us,

Do you say, “But Christianity is all spiritual, so we have abolished the law”?  Not so!  In Romans 7, verse 14, Paul tells us that the law is spiritual. And in Romans 3, verse 31, Paul says,

Do we then make void the law through faith? God forbid: yea, we establish the law.

Just as our perfect God exists forever, so do His perfect laws.  Psalm 111, verses 7 and 8, tell us,

The work of His hands are verity and judgment: all His commandments are sure. They stand fast for ever and ever, and are done in truth and uprightness.

And Jesus Christ himself said in Matthew 5, verse 18, that not the smallest part of the law will pass away, until heaven and earth pass away.  And as we see in Revelation 21, this is not until after the millennium — Jesus Christ’s triumphant thousand year reign has been completed.

Now let’s consider some of these laws and what they mean to us today.  Our political parties today have sold-out our God in a corrupt and evil deal to get the support of minority groups — for the sake of temporary power and graft they would destroy all our greatness forever.  And to do this, they are now in the process of destroying the immigration laws which have protected our nation.

They now demand that we admit — indiscriminately — all the world ’s overflow — from pagan lands whose people hate our God. From Asian and African lands whose people are totally impossible to assimilate — and who must either remain a hostile enemy block within our borders, or else mongrelize and destroy our own race if we mix wit them.

But God expressly forbids this.  While it is recognized that there will be some aliens here as students, merchants, and so forth — and that these are to be treated with honesty and justice — the anti-Christian race — those who hate our God — are expressly forbidden to even be allowed to live here.

They shall not dwell in thy land, lest they make thee sin against me.

And no aliens were ever to be allowed to become numerous lest they “devour the land” or “the people ’s strength,” as Isaiah 1, verse 7, and Hosea 7, verse 9, says.  We were warned if we let them become numerous, they will “fill themselves with the people’s wealth” — that’s Proverbs 5, verse 10.

And Ecclesiasticus 11, verse 34, warns us that if we

…receive a stranger into thine house, he will disturb thee, and turn thee out of thine own.

Have you ever wondered at the long genealogies of the various people mentioned in the Bible?  There was a good reason for this. Their genealogy proved that they were of pure Israel blood and were entitled to take part in the affairs of the nation.  Citizenship was not given for two box tops and a dime to all that came along.  Those who were of closely related blood lines — but not actually of Israel — could only be admitted to citizenship in the third generation born in the land.

Today, an immigrant hardly need be off the boat long enough to get over their seasickness before he can start the process of becoming a citizen. We do not require nearly enough time for aliens from some parts of the world to really learn our way of life. They can and do memorize certain things which they must be able to recite on their examination for citizenship — but these things pertain only to the mere mechanics of our government, not to the ideals which led the Founding Fathers to use those mechanics to make us great.

Under God’s laws — as set forth in the twenty-third chapter of Deuteronomy — those who were not closely related to us in race could not be admitted to citizenship ever — not even after ten generations born in the land.

By violating God’s laws, we now have accumulated considerable blocks of unassimilable aliens who have been given the vote. They hate all the ideals of this land to which they came only to get more money.  And now our political parties are selling out the great American majority in bidding for the support of the alien minority groups.

Under God’s laws, no one of another race is to be allowed to hold public office.  Deuteronomy 17, verse 15, says that

Thou mayest not set a stranger over thee, one which is not thy brother. The word translated stranger is the Hebrew word nokri which means not just someone you haven’t been introduced to, but one of another race.  That persons other races could reach positions of power is clearly stated to be merely a curse which comes upon us for our violation of divine law.

In the twenty-eighth chapter of Deuteronomy, it says,

We have been persistently led away from the laws of God by certain “liberal” political groups who don’t even claim to represent the majority of our people — the White Christian Americans — but who openly represent only alliances of minority groups.  These politicians call themselves “liberal”.  This also was known to God thousands of years before it happened — and He also told us of the true character of these politicians.

In the thirty-second chapter of Isaiah, the prophet is telling us of that time which is yet to come when the kingdom of God will be fully established and operating as it should be — and he tells us that when that time comes then “The vile person shall no more be called liberal.”  God speed the day!

For more than thirty years our politicians have betrayed us — the great majority — seeking the support of certain disloyal minorities.  The result has been the adoption of policies both at home and abroad which have brought us to our present position — facing a war in which we must fight for our very existence.  If we had obeyed our God in the making of our laws and our national policies, these evils would not have come upon us.

In the forty-eighth chapter of Isaiah, we are told,

Thus saith the Yahweh, thy Redeemer, the Holy One of Israel: I am the Yahweh thy God, which teacheth thee to profit, which leadeth thee by the way that thou shouldest go. O that thou hadst hearkened to my commandments then had thy peace been as a river, and thy righteousness as the waves of the sea….But there is no peace, saith Yahweh unto the wicked.

What wickedness?  Ours — in letting evil and treacherous political displace the laws of God — replacing with platforms written to see who can stoop to the lowest baseness to buy minority votes.  When will we learn that only by following the righteous laws of God, can we gain the peace and prosperity of God’s people?  And of these laws, none is more important than the immigration laws designed to keep our race pure — that we may remain God’s own people — Israel.