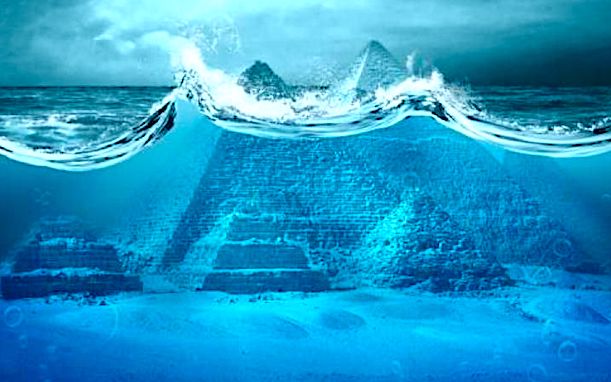 This short but compelling video by Nathan Hoffman — Were the Pyramids Built Before the Flood? (Masoretic Text vs. Original Hebrew) — explains  whether or not the Egyptian pyramids were built before the flood of Noah’s day — and why the answer ultimately comes to bear on the divinity of Jesus Christ.

The video also examines the compares the accuracy of the Hebrew Masoretic text with the Greek Septuagint, the Dead Sea Scrolls, the Tower of Babel, the age of the Earth, an extra ‘Cainan’ in Jesus’ genealogy, and the identity of the Melchizedek priesthood…

It clearly demonstrates how the Jews distorted their own Masoretic Bible in their vain and dishonest attempt to disprove that Christ was indeed the Messiah promised in Isaiah — and thus discredit Christianity in general.

But all that their efforts really accomplished was making their own “religion” — Talmudic Judaism — look ridiculous and un-scriptural.  For example, by making it appear that the pyramids were built before the flood, there wouldn’t be enough time for the Tower of Babel event to have taken place, and Shem would have had to outlive all his sons and seven subsequent generations of his descendants — so as to be alive at the same time as Abraham.

The Jews monkeyed with the biblical timeline for the sole purpose to ‘prove’ that Christ could not be the ‘High Priest’ claimed in Acts 23:4-5. Their twisting of scripture reveals just how little they actually know about the Bible, and how little they should be trusted — they are not our ‘spiritual elders’.

But thankfully God’s Word was preserved in the Greek Septuagint, which reveals the machinations of the Jews to us, and their eternal hatred of Christ:

But according to Egyptologists, the Great Pyramids were built about 2550 BC, about 200 years before the Flood. But wait a minute now — how could the Egyptians have built the Pyramids a whole 200 years before when the nation of Egypt didn’t even exist until after The Tower of Babel? That doesn’t make any sense.

And so Egyptian history predates Noah’s Flood — and continues on after the Flood unaffected by it — then the skeptics say a worldwide flood never happened or biblical history must be inaccurate.

However, the Pyramids are built on top of sedimentary layers which contain fossils. Creation scientists say that these layers were laid down during the Flood, which is evidence that the Pyramids would have been built after the Flood, not before it.

Also the name Egypt in Hebrew is Mizraim — and MIzraim is the son of Ham, the grandson of Noah. So clearly the Egyptians are the descendants of Noah’s grandson. But Noah didn’t begin to have grandsons until after they stepped off the Ark. So clearly Egyptian history could not have begun until after the Flood.

According to an award-winning documentary ‘Patterns Of Evidence: Exodus’, some scholars believe that Egyptian history has been dated incorrectly — and needs a major adjustment. Experts like John Bimson and David Rohl believe that Egyptians history needs to be moved forward on the timeline by about 200 years…

And when you correct the inaccuracies on this Egyptian timeline, then all of a sudden Egyptian history lines up perfectly with the events of the Exodus…

That still doesn’t solve the problem: the pyramids still predate the Flood, which means the only option left over is you have to question the biblical timeline.

Now, that’s not to say you should question biblical authority, but rather is the timeline presented by Creation Scientists really even biblical at all?

Well, according to the Greek Septuagint, it’s not…

We also recommend Hoffman’s video “How Long Were The Israelites In Egypt?”: