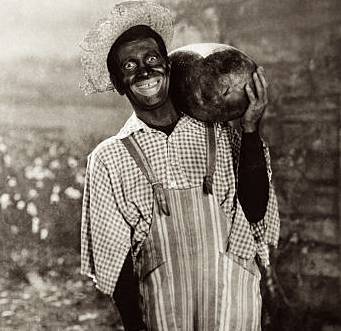 Whether or not one accepts the recent rounds of sorrowful apologies about blackface in the media, it is essential to note that the Christian offenders — Kelly, Northam and Herring — are apologizing for a Jewish crime:

Blackface, as a form of American “entertainment,” started out in the early 1800s, most notably through a highly popular minstrel show performer by the name of Thomas “Daddy” Rice, a white entertainer who blackened his face with burnt cork to ridicule Blacks and their culture. White minstrel shows lampooned Black people, presenting them as dim-witted, lazy, buffoonish, superstitious, criminal, but nonetheless prodigiously musical. Rice’s popular blackface character was named Jim Crow—a name that came to describe the racially repressive era after the Civil War in which white society was determined to violently force Blacks back into plantation slavery. Blackface died a well-earned death, but was revived when Jews became perversely connected with this racist “art form” as performers and as fans, filling auditoriums to watch blackface stage shows in Jewish neighborhoods all over America.

From the time of the earliest American colonies Jews had always been a formidable presence in the slave-based economy, where they became important slave traders and international marketers of slavery’s products, especially sugar, cotton, and tobacco. But after the Civil War Jewish immigration to America increased dramatically. Their history in Europe with Gentiles over many centuries was one of conflict and violence, and so in America they saw distinct advantages in helping to create a society that made but one distinction based entirely on skin color. Brandeis’s Irving Howe, author of the most popular book on American Jewish history, World of Our Fathers, is one of many Jewish scholars that admitted that Blacks were scapegoats for Jews:

“For decades American blacks had served…as a kind of buffer for American Jews. So long as native hatreds were taken out primarily on blacks, they were less likely to be taken out on Jews.”

So, for Jews, anti-Black racism was a benefit and a valuable asset to their own goals of gaining power and influence. Jews saw blackface minstrelsy as a vehicle to claim their whiteness and to ensure that racism—and not religious ethnicism—would become the American way. It was this conscious Jewish need to use Blacks as scapegoats that drove their involvement in that atrocious “art form” known as blackface minstrelsy. Jewish film scholar Lester D. Friedman is even more direct in his book Hollywood’s Image of the Jew:

“In actuality, many Jewish performers gained early and continued success using [blackface]….Indeed, it is too easy to ignore the derogatory aspects of such activities, the unconscious racism accepted and nourished by such cruel parodies, by citing historical contexts. The undisguised elements of ridicule in such blackface portrayals by Jews mimicking the outlandish stereotypes of blacks now looks suspiciously like one group’s desperate need to assert its own superiority by mimicking another.”

University of California religious studies professor Dr. Michael Alexander received a National Jewish Book Award for his book in which he asserts that minstrelsy—the public ridicule and mockery of the Black race—became identified with Jewish entertainers: “Jews performed this kind of minstrelsy in the 1910s and 1920s better and more often than any other group in America. Jewish faces covered in cork were ubiquitous.”

In fact, blackface and a singing style pioneered by Jews known as “coon shouting” were mainstays of Jewish entertainment, with their most popular performers, like Eddie Cantor, Sophie Tucker, Al Jolson, Irving Berlin, George Burns, and Florenz Ziegfeld, using Black-race mockery as a dominant theme. Jewish historian Dr. Jeffrey Melnick says that Jews played “a major role in the manufacture of the racial stereotypes on which American popular culture depended.”

The writer of this article on the history of blackface is jewish, but that won’t stop people from calling these historical facts “antisemitic”.  We are allowed to talk about the evils of blackface all we want, just as long as it doesn’t lead back to the Jews.  When the Jews use blackface, it’s excusable because, well, the Jews are just “pretending” to be racist so that White people will think they are integrating into White society.  Sure, that’s the ticket.

If anything, Jews are predictable, and one of their most common group behaviors is to accuse others of what they themselves have done or want to do.  Thus, the White man gets blamed for the Black slave trade even though the Jews controlled much of it behind the scenes.  Then jewish Hollywood makes movies about how evil the “White” slave masters were.  Jews control organized crime in America, and then jewish Hollywood makes movies about Italian gangsters.  Jews murder tens of millions of Christians during their Bolshevik “Revolution” and then accuse Whites of murdering millions of Jews in gas chambers.

This is how the Jews play “blackface” on the White man.