How Jews Undermined the Authenticity of the Ossuary of James, Brother of Christ 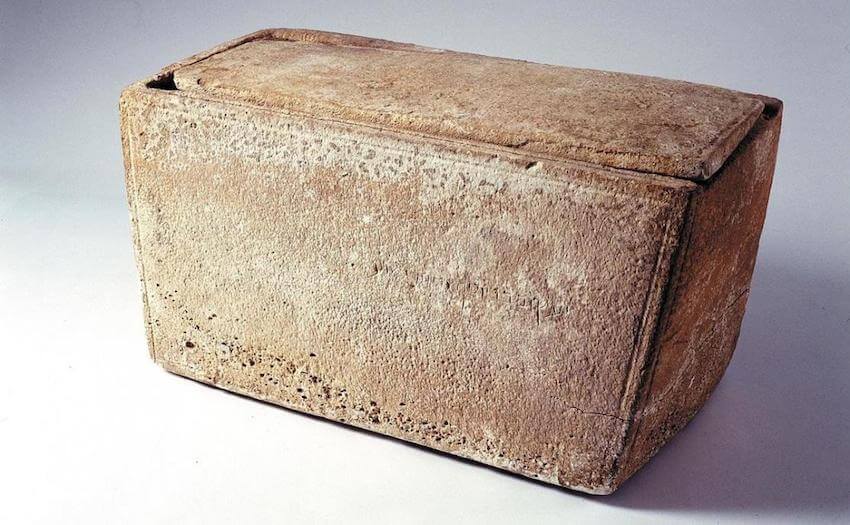 Supposedly, preserving history through archeology is permissible, except when it comes to that of Christianity.

The purported ossuary (bone box) of James, the brother of Jesus, is back in the news, as questions concerning its authenticity continue to plague the world-famous relic. The James Ossuary, as it’s come to be known, is a limestone bone box that bears an Aramaic inscription reading “James, son of Joseph, brother of Jesus.” Controversy—including charges of forgery—has surrounded this ossuary since the Biblical Archaeology Review first reported on the artifact in 2002. The saga of the James Ossuary culminated in 2012 with the acquittal of Israeli antiquities collector (and owner of the ossuary) Oded Golan in a seven-year “forgery trial of the century,” but the story isn’t over yet.

The antiquity of the 20-inch-long James Ossuary itself is not questioned—it dates between the first century B.C.E. and 70 C.E., a period when the practice of ossilegium (the collection of the bones of a deceased person) was prevalent among the Jewish population. It is the inscription on the James Ossuary—a mere 20 letters written in Aramaic—that has incited years of debate. If real, the inscription would be the earliest written reference to Jesus. Because the ossuary was purchased with an unknown provenance from an antiquities dealer, the authenticity of the “brother of Jesus” inscription needed to be verified by experts.

The inscription, reading “James, son of Joseph, brother of Jesus” has been authenticated by two eminent paleographers (specialists in dating, interpreting and authenticating inscriptions): André Lemaire of the Sorbonne and Ada Yardeni of the Hebrew University of Jerusalem. In 2003, however, the Israel Antiquities Authority (IAA) appointed a committee of scholars to study the “brother of Jesus” inscription and report its findings. The committee concluded that the inscription was a forgery.

According to Dutch scholar Pieter van der Horst, who published an analysis of the IAA committee’s report in his new book, the IAA “appointed almost exclusively committee members who had already expressed outspoken opinions to the effect that the inscription was a forgery.” Van der Horst observes that the committee members didn’t abide by the IAA guideline “to arrive at the truth based on pure research only—without taking into account any other related factors regarding the collector, current gossip, rumors or prejudices,” nor did they follow the directive that each scholar “should work in his own discipline.

One would be foolish not to suspect that the jewish antiquities dealer, Oded Golan, was arrested not because he was a “forger” but rather to specifically cast doubt on the authenticity of James’ ossuary. After all, in the end Golan wasn’t convicted of forgery at all but rather given a slap on the wrist for selling antiquities without a license.

This article also doesn’t mention that experts at the Toronto Royal Ontario Museum, which displayed the ossuary, independently confirmed that they believed the inscription to be authentic:

…the box has been subjected to tests which are consistent with it coming from the right place and the right time, said Dr Ed Keall, a curator at the Royal Ontario Museum. “It is a genuine box with a genuine inscription, dating from first century AD, likely from the Silouan Valley, Jerusalem,” he said. …

The Royal Ontario Museum in Toronto subjected the inscription to a tougher test, using long-wave ultraviolet light which should highlight attempts to fake it. Again, it looked genuine, said Dr Keall.

The Israel Antiquities Authority (IAA), which pronounced the ossuary to be fake, is a jewish organization that admittedly did not follow proper procedure to come to its forgone conclusion – after all, Jews often deny that Christ existed at all, and have done their best to cast doubt on many aspects of the authenticity of the New Testament.

The fraudulent conclusion of the IAA should carry no weight for those objectively looking at the evidence.