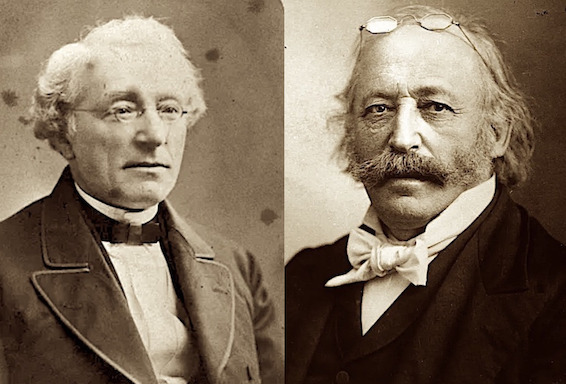 (Cincinnati.com) Two Cincinnati rabbis — who felt that Jews in America needed a holiday of their own to compete with Christmas — are responsible for contriving and popularizing Hanukkah in America, according to Dianne Ashton, a professor of religion studies at Rowan University:

In an editorial published by the independent media website, The Conversation, Ashton explains that outside of America, Hanukkah is regarded as a minor Jewish holiday.

In the decades after the Civil War, Rabbi Isaac M. Wise of Plum Street Temple and Rabbi Max Lilienthal of Mound Street Temple introduced Hanukkah festivals to their congregations and promoted them in their publications to Jews across the nation.

Hanukkah, with its many variant spellings, is the Hebrew word for “dedication.”

The holiday commemorates the re-dedication of the Jewish holy temple in Jerusalem after the Maccabees, a group of Jewish rebel warriors led by Judah, liberated the temple from the Seleucid Empire in 165 B.C.

The temple’s menorah was required to be lit every night. According to Jewish lore, only one flask of holy olive oil was found, enough to light for one day, yet the oil burned for eight days.

Hanukkah, also known as the Festival of Lights, begins on the 25th day of the Hebrew month Kislev (which can fall in parts of November and December).

For eight days, candles are lit by a shamash (“helper”) candle, adding one candle each day, to commemorate the miracle of the lights.

In her book, “Hanukkah in America: A History,” Ashton reveals how Wise and Lilienthal, as leaders of Reform Judaism in America, reshaped the holiday to attract Jewish children to honor their heritage.

One obstacle, as they saw it, was that schools taught about American heroes like George Washington rather than ancient Jewish heroes in a far-off land…

Another obstacle was Christmas, which was gaining popularity in the late 19th century. Its traditions of songs and gift-giving were particularly enticing to children.

Inspired by the way Christian churches used Christmas to teach children about their religion, Lilienthal adopted the use of hymns, festivals and toys for Hanukkah.

“We must do something, too, to enliven our children,” Lilienthal wrote in an editorial in 1876. “[They] shall have a grand and glorious Chanukah festival nicer than any Christmas festival.”

Lilienthal created a festival where the Hanukkah story was told, candles were lit and candies and gifts were handed out to children. Wise also introduced the festivals to his congregation. Then they encouraged all Jews to do likewise.

“Chanukah is entirely neglected in so many of our Jewish families … [that] we [should] celebrate it publicly … in every congregation,” Lilienthal wrote. “The children shall have it as a day of rejoicing [in] our religion. Chanukah can be celebrated to delight young and old.”

In 1891, The Enquirer reported on the “Chanukkah” festivities planned in Cincinnati…

The Chanukkah Festival Society of the Poor would be held at Plum Street Temple where “over 500 children will be made happy with toys, candies and other good things.”

“In America, this minor festival has attained major significance.”

Not only is Hanakkah a completely fabricated holiday — like Afro-American affirmative action holiday, Kwanzaa — the notion that today’s Jews are descendants of the ancient Israelites — and more specifically Judah and the Maccabees — is far more preposterous.

The Jews themselves admit to this impersonation in their own publications — according to the 1980 Jewish Almanac, “Strictly speaking, it is incorrect to call an ancient Israelite a Jew or to call a contemporary Jew an Israelite or a Hebrew.”

As Jewish-Israeli professor Shlomo Sand thoroughly demonstrated in his book, The Invention Of The Jewish People, the notion that today’s Jews are descendants of King David is just that — a notion — a myth — wishful thinking.

And these two rabbis in Cincinnati contrived Hanukkah as a way of selling this fake babylonian mystery religion — Judaism — to young impressionable Jewish children — who are rewarded with gifts and gelt if they agree to go along with this impersonation.

As Jews have risen in preeminent power and wealth in America — to the point where they now “own the whole freaking country” — they naturally have used that ill-gotten power to legally abolish any suggestion of Christmas on public property while replacing it with their ersatz Hanukkah.

Read in their own words how Chabad-affiliated Jewish lawyers and corrupt judges have manipulated the law to allow Hanukkah displays on public property — while maintaining the ban on Christmas displays.

And then they have the chutzpah to now claim that there is now a “War on Hanukkah“.