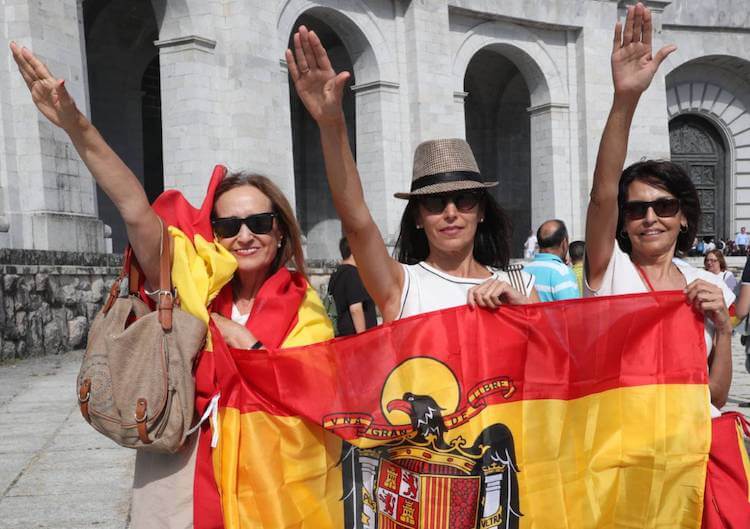 Spain is attempting to whitewash the legacy of Francisco Franco by exhuming his remains from the Valley of the Fallen – but hundreds turn out to protest:

Hundreds of people gathered on Sunday at the Valley of the Fallen to protest the Spanish government’s plans to remove the remains of former Spanish dictator Francisco Franco from the controversial monument north of Madrid.

Protesters traveled from across Spain to attend Sunday’s protest, chanting slogans such as: “Long live Spain;” “Don’t touch the Valley;” and “Franco, Franco, Franco!” outside the basilica that holds Franco’s tomb.

Cars began pulling up to the Valley of the Fallen from 9am onward to attend the demonstration. “We have come to say goodbye to Franco,” said Zaqueo Echeverría, a 27-year-old who traveled with his pregnant wife and three children from Segovia. Pilar Gutiérrez, the president of Movement for Spain, which organized the protest said: “Franco isn’t dead. Anyone who dies in Christ is not dead.”

The 13.6-square kilometer Valley of the Fallen site remains hotly contested in a country that is still struggling to come to terms with the legacy of the fascist dictatorship of Franco, who was the Spanish head of state from the end of the Civil War in 1939 to his death in 1975.

The exhumation of Franco’s body has nothing to do with “reconciliation”, as the Left would have us believe; rather, it is about literally erasing a major – and popular – part of Spain’s history.

The last thing the liberals want is young Spaniards looking into the real history of Franco’s “fascism” in Spain and finding out that it wasn’t exactly the “evil” that they’ve been taught. In fact, it was the murderous communists who were the real butchers of the Civil War, and it’s their true nature that needs to be whitewashed.