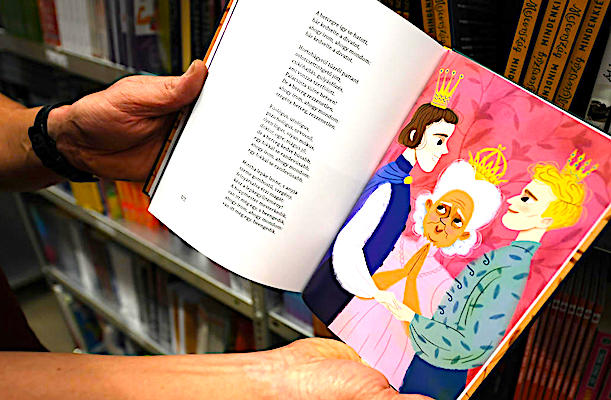 The Budapest Government Office on Tuesday ordered a Hungarian publisher to place a disclaimer on books that “display patterns of behavior that differ from traditional gender roles” after the publisher released a collection of fairy tales featuring LGBT and non-white characters:

The office claimed that the Labrisz Lesbian Association, an advocacy group for lesbian, bisexual and transgender women, had committed “dishonest commercial practices” by failing to inform potential readers of the contents of its book, “Wonderland is for Everyone.”

“Consumers may thus unknowingly encounter content that goes beyond the usual content of fairy tales, and may decide to purchase the book on the basis of misleading information,” the office argued.

Labrisz called the decision “discriminatory” and unconstitutional, and said it would challenge it in court.

The book, which sparked controversy in September after a neo-fascist politician fed it into a paper shredder during a press conference, re-tells traditional fairy tales using what the publisher called characters from “stigmatized or minority groups.” In one story, a prince marries another prince, and in another, a doe is granted a wish to become a buck. Other stories feature Roma and disabled characters.

Speaking about the book in an October radio interview, Prime Minister Viktor Orbán equated homosexuality with pedophilia, saying that Hungarians are “patient and tolerant” of homosexuality, “but there is a red line: leave our children alone.”

In a statement on its website, Labrisz encouraged readers to report other well-known children’s tales to the consumer protection authority for depicting non-traditional gender roles.

“Were you shocked that you had to watch two men, Timon and Pumba, provide a safe family background for Simba without prior notice? Are you outraged that Sleeping Beauty grew up in a loving household created by three women? Maybe another tale blew your fuse? Then your time has come! Turn to consumer protection!” the group wrote.

Labrisz has filed a defamation lawsuit against the publisher of pro-government newspaper Magyar Nemzet, as well as the author of an article published there which accused the organization of pedophilia.

“We must judge the book ‘Wonderland is for Everyone’ as we judge pedophilia, and judge Labrisz … as we judge a pedophile organization, because that’s what this is about,” the article’s author, György Németh, wrote in Magyar Nemzet.

Of course, this isn’t about “freedom of speech” — this publisher is using fairy tales to groom innocent children and their parents into accepting sodomy as “normal” — and thereby make them more susceptible to predatory pedophiles.

Even though homosexuals comprise only 2% of the population, they account for almost 40% of all pedophiles — a fact that they vociferously deny — as if we’d ever expect pedophiles to ever admit the truth about themselves.

And it’s not as if the Hungarian government is completely censoring this book — which they could do if they really wanted to crack down on sodomy and pedophilia — rather they are treating the book like a pack of cigarettes with a warning label to inform consumers of potential hazards associated with this product.

But it’s impossible, of course, to convince a sodomite that they are not “normal” — after all, homosexuality is no longer treated as an emotional and developmental disorder — by decree, rather than by any scientific proof.

From the perspective of homosexuals, traditional hetero-normative families are pathological and oppressive — repression of their perversions is the ultimate evil — they have the right to groom children without the interference of “the state”.

Next thing you know, governments that want to protect children from sexual predators will be throwing Jews in “gas chambers” — or something like that.