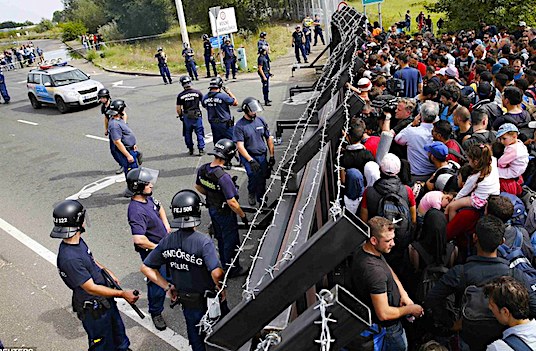 Right in the middle of the coronavirus pandemic, Hungary has published its new National Security Strategy (NSS), which lists illegal migration, demographic change, armed attacks, and hybrid warfare as some of the biggest threats the country faces:

[Hungary] regularly updates its NSS every eight years, with additional interim updates if and when warranted.

The NSS lists migration as one of the major security threats that Hungary faces.

“The crisis caused by mass immigration has a decisive effect on Hungary’s security. The crisis has made it clear that unexpected, uncontrolled, mass and illegal migration is a new type of challenge that could even jeopardize the security and stability of the European continent, while maintaining national security, public safety and security,” according to the document.

The security threat of migration is also not going away anytime soon due to the root causes of migration only worsening. Hungary’s NSS document states:

The primary cause of mass, uncontrolled and illegal migration is the significant increase in the number of politically, economically and socially unstable states in many regions of several continents, which are poorly governed and perform their basic functions only to a limited extent and to a low standard. They are usually characterized by overpopulation, widespread poverty, and negative environmental changes at the same time. The wave of illegal migration can also become a tool for hybrid warfare.

…The NSS document points to demographic changes, including those happening outside of Hungary, as a potential threat. It also outlines how Hungary has remained a source of strength for Europe.

“The key to the survival of Hungarians and the framework of our national existence is a strong, nation-based Hungary. Our millennial statehood, our Hungarian language and culture, our history and traditions, and our Christian values are a valuable contribution to the diversity of Europe,” the report states.

Hungary also emphasizes the benefits of being a homogenous nation with a shared language in terms of its security:

‘Our primary endowment is the unity, language and culture of a nation-based Hungarian consciousness and a community of shared destiny from here and beyond our borders. Our status as an ally and a member state of the European Union significantly strengthens the security and international advocacy capacity of Hungary.

The document also outlines how a “common language” and the “unity of the nation” help improve Hungary’s resilience to hybrid attacks, which the document defines as “coordinated and widespread diplomatic, information and secret service operations, coupled with financial-economic pressure, speculative financial attacks or military threats”.

Third World immigration is literally an undeclared war against all White Christian nations by international Jewry.

And, yes, it is a literal ‘hybrid war’ whose aim is to create nations of racial hybrids that are incapable of ultimately opposing the world hegemonic agenda of Mystery Babylon — the international mercantile system with Rothschild as the Cap Stone.

But here again we see Hungary very cleverly turning the rhetoric of diversity against the enemy — by remaining White and Christian, Hungary adds diversity to a continent that is becoming less White, more mongrelized, and thus less ‘diverse’ by the minute.

With its closed borders Hungary provides a much needed bulwark against the flood of Third World migrants trying to make their way to the most affluent and Marxist nations in northwest Europe.

The future of White Europe depends on Hungary, a geographical lynch pin, to remain migrant-free and Christian.