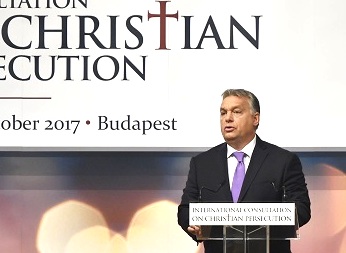 A coalition of anti-migrant countries is forming in Europe, headed by Hungary’s PM Viktor Orban, who predicts an inevitable split between those countries who have the political will to survive and those who embrace diversity and death:

Matteo Salvini, the right-wing Interior Minister in the Italian government, recently called for a Rome-Warsaw axis to build “a new Europe” that was against migration.

“I’d like to create a pact, an alliance for everyone who wants to save Europe, the more of us, the better,” he said. Poland’s right-wing Prime Minister Mateusz Morawiecki said earlier this week that “with Mr Salvini we are on the same page with regards to many European matters”.

And now Hungary’s Prime Minister has welcomed the creation of an anti-immigration “axis” in Europe as well. In a speech, Viktor Orbán said he wanted to see an anti-immigration majority in the EU institutions and that he would team up with countries like Italy and Poland to change the bloc’s direction.

The right-wing leader said there could be no “compromise” on the migration issue and that he would have to “fight” leaders such as Emmanuel Macron to “respect Hungarians’ decision not to become an immigrant nation”. Mr Orban also said he believes there will be “two civilisations” in the EU: “one mixed Muslim-Christian in the west and one traditional, in central Europe”.

Orban is very cleverly stressing the Christian heritage of Hungary and Europe in general as not only worth preserving, but also by EU law is protected under religious freedom.

This is clever because Christianity is overwhelmingly White; it always has been and always will be.  So instead of defending “white nationalism” or the generic “white race,” he defends Hungary’s right to remain a Christian nation, which no Jew in the EU parliament can argue against.

This is where all so-called “white nationalists” will fail simply because the Jews have a stranglehold on laws concerning race.

By claiming the right to remain Christian, a country ipso facto is essentially ensuring that it will remain largely White.  Countries that still maintain their Christian identity, like Hungary and Poland, are ensuring that their racial identity will be legally maintained without even having to mention it.

Europe has a choice: White Christian rulers or the Jews and their multiracial armies.  There’s no middle ground.