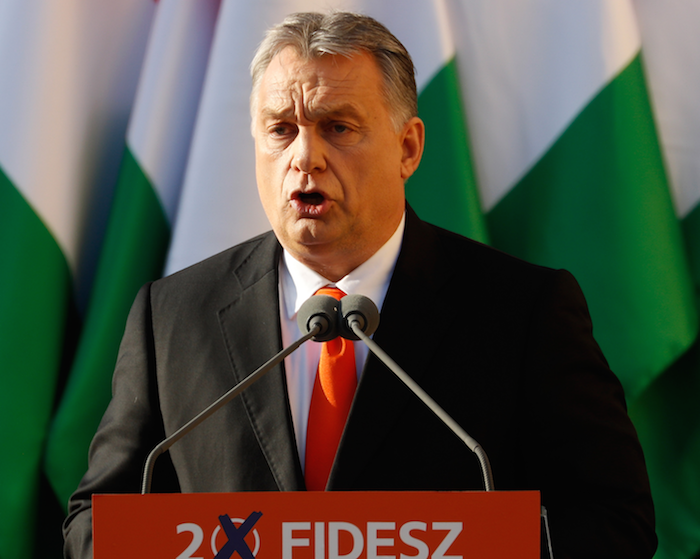 Hungarian President Viktor Orban accused Ronald Lauder of having a left-wing political agenda after the World Jewish Congress president demanded that he condemn an anti-Semitic image in a pro-government magazine.

“I am surprised however that you are asking me to limit the freedom of speech and the freedom of press. Despite all my respect for you, I cannot fulfill such a request,” Orban wrote to Lauder, accusing him of only speaking out “when a left-wing public figure of Jewish descent is at the centre of a debate.”

“It is hard to comprehend the clear left-wing and liberal bias that you demonstrate in Hungarian public affairs,” continued Orban. “I am uncertain as to whether we should [view]] your letter a political document, or a stand taken for the Hungarian Jewish community. In case it’s the latter, thank you for it. Even if it is unnecessary.”

Such an image “is one of the oldest and vilest caricatures of the Jewish people and it places not just the magazine, but all of Hungary in a very bad light,” WJC President Ronald Lauder wrote in a letter to Orban last Friday.

The magazine accuses Heisler and his umbrella group, Mazsihisz, of accounting irregularities in connection with a state-funded synagogue renovation and museum project in Budapest, according to the AFP news service. Mazsihisz denies the allegation.

Powerful Jews like Ronald Lauder have grown accustomed to having the goyim groveling at their feet whenever they claim to be offended by even the smallest of slights, like a banal magazine cover.  Of course, the cover in question is “antisemitic” only in the minds of Jews who believe that anything negative said about any Jew anywhere in the world is potentially the beginning of “another” so-called “Holocaust”.  Because of the jewish monopoly on all mainstream media, they are able to portray every unflattering image of or comment about Jews, no matter how factually-based, as “age-old antisemtic canards.”

Jews need to familiarize themselves with the fable of “The Boy Who Cried Wolf” because their constant screeching about “antisemitism” is diluting whatever ill-gotten power that it has — clearly, the charge of “antisemitism” no longer strikes terror in the hearts of the goyim.   And as Orban points out, Lauder is a hypocrite who is concerned only about promoting his jewish agenda, and an essential part of that agenda is to censor anyone anywhere who dares criticize a well-deserving Jew.