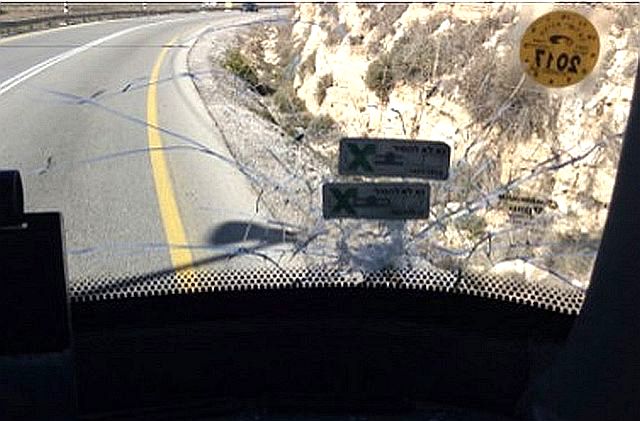 The jewish press is reporting a harrowing and vicious attack on a bus in Israel that resulted in a cracked windshield but no fatalities:

Palestinian Authority terrorists attacked an Israeli bus driver Tuesday morning as he drove near the Jewish city of Ma’ale Adumim near the Dor Alon gas station, in the direction of the Issawiya cliffs, northeast of Jerusalem.

The bus windshield was damaged by the stones that were hurled at the vehicle.

No physical injuries were reported in the attack, according to the Hebrew-language 0404 military website. IDF soldiers searched the area for the attackers.

When Jews are allowed to define rock throwing as “terrorism,” they will then use these virtually harmless acts to rationalize literal military attacks against civilian targets in Palestinian territories.  This is how the Jews play this game and sell the ongoing genocide in Palestine to American Jews in the U.S.  The IDF is merely retaliating against real and immediate provocations made by Palestinians.  No one ever asks the question, “Why are Palestinian children throwing rocks at Israeli buses?” because to ask that is “blaming the victim,” by suggesting that somehow “the Jews deserved it.”

The Jews play the same game with “antisemitic” attacks against Jews anywhere in the world.  All such “attacks” are immediately reported in all major and minor jewish news outlets, and millions of Jews go on high alert when a rabbi in Brooklyn is called a “Jew” by a Muslim during an argument on the street.  After all, if this “attack” isn’t met with “international condemnation,” Jews will be rounded up and put in gas chambers in no time at all.  The so-called holocaust never would have happened if it had been  illegal to criticize Jews in Germany, or so their hysterical “thinking” goes.