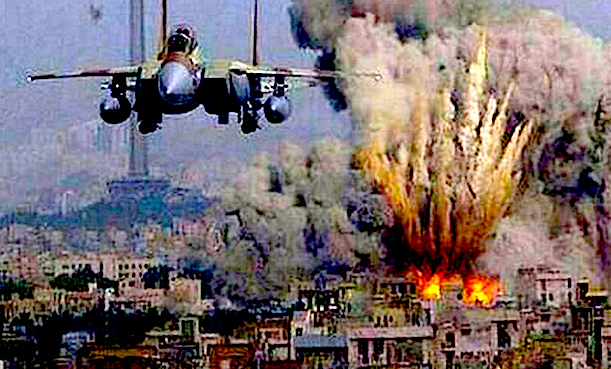 Israel estimates that potentially “hundreds” of its citizens might be arrested and prosecuted for war crimes by the International Criminal Court — whose jurisdiction it conveniently rejects — and is working on strategies to help them avoid prosecution and accountability, the Defense Minister said on Tuesday:

Including himself among Israelis who could be threatened with arrest, Benny Gantz told Reuters: “I was never afraid to go across enemy lines, I will continue to stand wherever I have to.”

The Hague-based tribunal ruled last month that it has jurisdiction over the West Bank, Gaza and East Jerusalem. The ruling could lead to criminal investigations of Israel and of Palestinian militant groups including Hamas.

Israel is not a member of the court and rejects its jurisdiction, a position backed by its close ally the United States. Palestinians have welcomed the ruling as a chance for justice for victims of Israeli attacks.

In an interview on Israel’s fortified border with Gaza, Gantz, who also holds Israel’s justice portfolio, called the ruling a “negative development” and added: “We have our own teams working in different (places) to try (and) influence (the ICC).”

Gantz was the military’s chief of staff during a 2014 war between Israel and militants in Hamas-controlled Gaza. The ICC has pointed to that conflict as a potential issue to be probed.

Asked by Reuters how many Israelis, including himself, might expect to be subject to arrest should the probe lead to criminal investigations, Gantz said: “I guess several hundred, but we will take care of everybody.”

Gantz called that “an estimate”, declining to say if Israel had drawn up a list of officials. Israel will provide legal assistance to any implicated Israelis and will give them legal warnings regarding travel if necessary, Gantz said.

Asked if he himself might change his travel plans in light of the ICC probe, Gantz said: “So far, no.”

Jews are the greatest advocates of international law, human rights, and protesting against genocide — except where Israel is concerned — and that’s why Israel refused to join or acknowledge the jurisdiction of the International Criminal Court.

Ironically, it was a Jewish attorney — Ben Ferencz — who was instrumental in creating such a court to prosecute such war crimes — and the Jews were fine with that at the time because they were prosecuting “Nazi” war crimes.

Virtually everything Israel has done — by constantly expanding their borders and mercilessly crushing any resistance — and cynically calling that resistance “terrorism” — is prosecutable under ICC laws — and they know it.

Israel was founded upon the displacement and ethnic cleansing of the Palestinian people — and the early Israeli leaders like David Ben Gurion and Menachim Begin accepted and embraced that grim reality — they were more than willing to commit genocide and terrorism if that’s what it was going to take to create and defend a Jewish Homeland™.

Nation building is not for the faint of heart.

Not only did they murder Palestinians — but anyone who stood in their way was considered fair game to be eliminated with extreme prejudice — British occupying forces, Count Bernadotte, or fellow Jews like Jacob De Haan who naively believed Jews and Palestinians could share the land.

Even John F. Kennedy and Martin Luther King paid the ultimate price of questioning the Zionist dream of ultimately taking all of Palestine — including Gaza.

With the help and complicity of pro-Zionist Jews in Hollywood — and their Zionist media industrial complex — the ethnic cleansing of the Palestinians has been whitewashed and presented to the public in the best possible light — much the same way the Jewish media had decades earlier whitewashed the Bolshevik genocide in the most flattering way.

But it’s foolish to claim that Israel doesn’t have “a right” to exist — of course it does — Jewry had the wealth and political power to create Israel — and to manipulate America into backing them up — in realpolitik “might makes right”.

Countries arise out of conflict and bloodshed, with winners and losers — Israel is no exception — what is now happening to the Palestinians has happened throughout history — but we just don’t like to be reminded of it —  genocide conflicts with the image we have of ourselves — especially hypocritical evangelical Christians who are complicit with Israel’s war crimes — and should be charged along with the Israelis.

Israel feels “singled out” by its critics — after all, they say, atrocities occur every day worldwide — but they wrongly conclude that they are “singled out” because of “antisemitism” — the problem with that canard is that many of Israel’s most vociferous critics have been Jews.

The late Shulamit Aloni — a former Israeli Member of the Knesset and Education Minister — admitted that the Israelis cynically invoke the “Holocaust” and “antisemitism” to deflect any criticism of their brutal treatment of the Palestinians.

Israel is “singled out” because it has falsely sold itself to the world as a beacon of white western democracy — while its victims are poor, defenseless people of color — and no one has sympathy for violent white racists — Jews themselves have made sure of that. 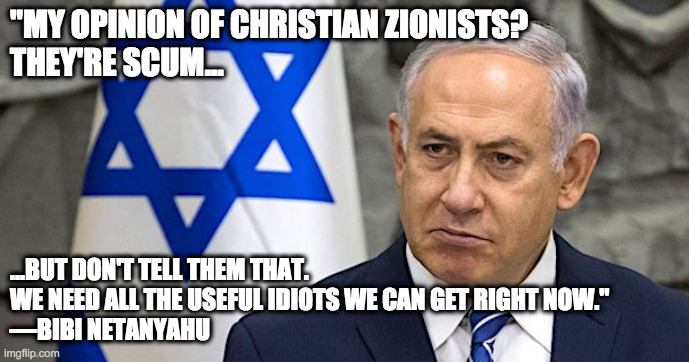