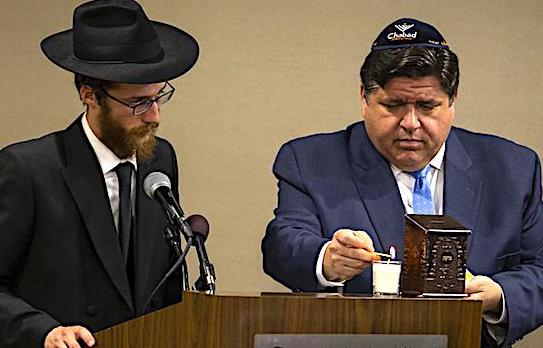 Illinois Governor J.B. Pritzker (D), scion of the jewish oligarchical Pritzker fortune, signed a bill into law on Friday that mandates all public schools in the state to teach “LGBT history” to students, emphasizing the “roles and contributions” of gays and transgenders in the history of Illinois and the United States:

The law amends the school code in Illinois. Specifically, it mandates that “the textbooks authorized to be purchased must include the roles and contributions of all people protected under the Illinois Human Rights Act and must be non-discriminatory as to any of the characteristics under the Act.”

It further “provides that textbooks purchased with grant funds must be non-discriminatory” and “that in public schools only, the teaching of history of the United States shall include a study of the roles and contributions of lesbian, gay, bisexual, and transgender people in the history of this country and this State.”

Commenting on the new law, State Sen. Heather Steans (D), a pro-LGBT advocate, said, “It is my hope that teaching students about the valuable contributions LGBTQ individuals have made throughout history will create a safer environment with fewer incidents of harassment. LGBTQ children and teenagers will also be able to look to new role models who share life experiences with them.”

…In addition to the “LGBT history,” the schools must also “include a study of the role of labor unions and their interaction with government in achieving the goals of a mixed free enterprise system. No pupils shall be graduated from the eighth grade of any public school unless he or she has received such instruction in the history of the United States and gives evidence of having a comprehensive knowledge thereof.”

Gov. Jay Robert Pritzker is a member of the Pritzker family, which owns the Hyatt hotel chain, and he has an estimated net worth of $3.2 billion.

Pritzker is just doing what Jews do best: take a leading role in transforming our Christian society into one that is firmly steeped in jewish values, like homosexuality, Marxist economic theory, multi-racialism, and family-wrecking feminism.  But don’t take our word for it; Democratic presidential front-runner, Joe Biden said it, making even the Jews a little nervous about the spotlight he shined on them in doing so.

Praising Jews is good, but just don’t overdo it, Uncle Joe, and give the ‘antisemites’ any more fodder than they already have, the thinking goes.

Pritzker, and his fellow co-religionist/ethnic, Rahm Emmuel, have presided over Chicago, the most violent city in America, with mass shootings occurring virtually every day despite having the most stringent and restrictive gun laws in the country, yet as we recently learned from the communist mayor of New York City, Bill deBlasio, mass shootings committed by Blacks “don’t count” as mass shootings.

Sure Chicago has some “problems”, but to quote Petula Clark, just “forget all your troubles, forget all your cares and go downtown” and have some fun at the gay disco that you learned about from your “100% kosher” public school “education”.