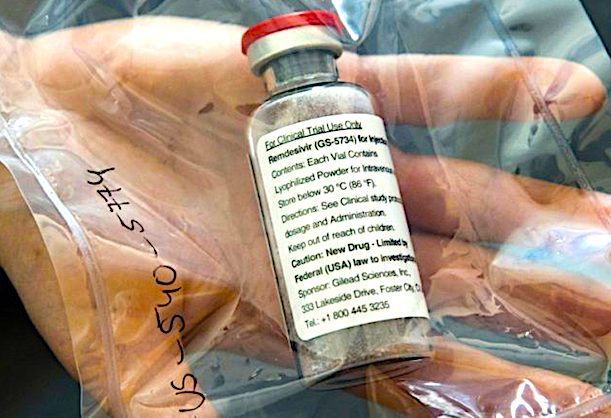 (Times Of Israel) In an “exceptional” emergency move, the FDA has greenlighted Remdesivir, an untested, experimental, and extremely expensive  drug developed for the treatment of Ebola, to now be given to all hospitalized patients with advanced COVID-19 lung infections:

The results of US trials of antiviral drug remdesivir for treating coronavirus are encouraging, but it is too early to celebrate, the CEO of the drugmaker’s Israel branch said in an interview Monday.

“Initial results are encouraging, but it is important to note that the measure taken by the Food and Drug Administration was exceptional. It approved the emergency use of the drug to respond to the global pandemic which is an extraordinary situation,” Ofra Feinmesser of Gilead Sciences Israel told the Ynet news website.

…Remdesivir is a broad-spectrum antiviral medication originally developed for the treatment of Ebola.

“This was lightning speed in terms of getting something approved,” said FDA commissioner Stephen Hahn, calling the drug “an important clinical advance.”

The FDA acted after preliminary results from a government-sponsored study showed that remdesivir shortened the time to recovery by 31 percent, or about four days on average, for hospitalized COVID-19 patients.

Those given the drug were able to leave the hospital in 11 days on average vs. 15 days for the comparison group. The drug may also help avert deaths, but the effect on mortality rates, if it exists, is not yet clear…

The FDA said preliminary results from the government study warranted Friday’s decision, though regulators acknowledged “there is limited information known about the safety and effectiveness of using remdesivir.”

The drug’s side effects include potential inflammation of the liver and problems related to its infusion, which could lead to nausea, vomiting, sweating and low blood pressure. Information about dosing and potential safety issues will be provided to physicians and patients, the FDA said.

The National Institutes of Health’s Dr. Anthony Fauci said last Wednesday the drug would become a new standard of care for severely ill COVID-19 patients. Remdesivir, which blocks an enzyme the virus uses to copy its genetic material, has not been tested on people with milder illness.

The FDA authorized the drug under its emergency powers to quickly speed the availability of experimental drugs, tests and other medical products during public health crises.

In normal times the FDA requires “substantial evidence” of a drug’s safety and effectiveness, usually through one or more large, rigorously controlled patient studies. But during public health emergencies the agency can waive those standards and require only that an experimental treatment’s potential benefits outweigh its risks.

Gilead has said it will donate its currently available stock of the drug and is ramping up production to make more. It said the US government would coordinate distribution of remdesivir to parts of the country that need it most.

What Fauci stated about Remdesivir becoming “standard of care” for COVID-19 amounts to a potentially huge financial windfall for Gilead-Israel.

Remdesivir costs about $1,000 per dose — whereas hydroxychloroquine, which does work, costs only $0.65 per dose.

“Standard of Care” in medical parlance means that this drug will be used on every patient in hospitals with advanced COVID-19-related breathing problems.

The “Standard of Care” designation is what every drug company aspires toward with any drug — and without proper testing of its effectiveness or safety, Fauci has already tentatively granted Remdesivir that coveted status.

Only an ‘antisemite’ would question the sagacity or motivation of such an unprecedented move by the FDA in favor of this insufficiently-tested Israeli-produced drug.

After all, only a couple of weeks ago the FDA greenlighted another questionable Israeli drug — one used to treat erectile dysfunction — to treat COVID-19.

But recall how the FDA dragged its feet over even allowing the cheap, safe and effective hydroychloroquine to be tested on COVID-19 patients — despite overwhelming anecdotal evidence that it was actually curing many patients, not merely reducing their hospital stays by four days, as is the case with the expensive Remdesivir.

We reported in November of 2019 — just a few months prior to the “COVID pandemic” outbreak — that the FDA announced it was opening a satellite office in Tel Aviv to help fast-track Israeli drugs to the U.S. market.

But let’s not jump to any ‘antisemitic’ conclusions.

Any ‘exceptional’ or ‘unprecedented’ or preferential treatment Israeli drug companies receive from the FDA, of course, “must be” well-deserved.