In Only 12 Years Muslims Will Be The Majority in Belgium 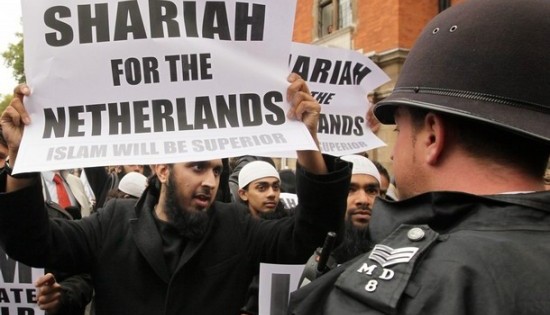 The rapidly growing Islamic Party in Belgium wants to create an independent Islamic state within Belgium once it achieves its anticipated majority status in only 12 years:

The Islam Party, that wants to create an Islamic State and separate men and women on public transport, will almost certainly participate in Belgium’s local election next month.

While four other participating parties want to ban the Islam Party, it is probably not a possibility as the party’s statements are seen as freedom of speech in Belgium.

Party’s on the left and the right of the political spectrum say that parties such as the Islam Party ‘threaten public liberties’.

The Humanist Democratic Centre (CDH), the Socialist Party (PS), the Independent Federal Democrat Party (DEFI) and the right-wing Reform Movement (MR) want to ban such parties and have announced a proposal.

But among one of the Islam Party’s heaviest opponents, Flemish Interest or Vlaams Belang, a different opinion can be heard.

“It is a form of weakness” the chairman of the Flemish Interest says about banning the Islam Party. “The reality is that this party has a large number of followers and they won’t disappear”, Tom van Grieken says.

“It is better to focus on decreasing mass-migration and radical Islam in our cities. With a ban, we deny reality, but won’t change it,” Van Grieken adds.

The leader of the Islam Party, Redouane Ahrouch has clear goals for the future as he thinks Belgium will have a Muslim majority soon.

“Within 12 years, Belgium will have a Muslim majority” he said in May this year, and added that then there will be two groups that can lead the country: “Extremists or democrats like us”.

In April the leader of the quickly expanding party said their “goal is a 100% Islamic State, but we don’t mean we want to oblige the headscarf” (..) By establishing Sharia law we want to follow the way of the prophet and the Quran”, he added.

Ahrouch’s party will take part in 28 municipalities and will expand from Brussels to other large cities like Antwerp and Ghent.

Belgium is handing over its country to a hostile invading force without a shot being fired.  Like Sweden, the average Belgian prides himself on just how liberal and “inclusive” they can virtue signal with each other.  It’s only fitting that the EU headquarters is in Belgium, a shining beacon of diversity and tolerance which is rapidly disappearing — literally being wiped off the map.

And the right-wing party Vlams Belang is really no help — they are pro-Zionist like most of the “far right” in western Europe, and as long as they continue to sell themselves out to jewish interests, Belgium has no effective opposition to the socialist nation wreckers who dominate Belgium.