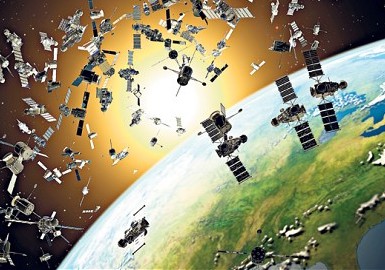 India, one of the world’s largest unregulated environmental polluters, is now extending its reach into space where one of their exploded satellites has produced debris that now threatens the International Space Station, a NASA spokesman has stated:

NASA is calling India’s destruction of a satellite last week a “terrible, terrible thing” and says the space debris created by the explosion should be considered a threat to the International Space Station and the astronauts on board.

India intentionally destroyed one of its satellites with a missile last week, a move Prime Minister Narendra Modi welcomed as one that established India “as a space power.”

But NASA Administrator Jim Bridenstine told employees on Monday that it posed an “unacceptable” threat to astronauts on board the ISS.

He said the satellite shattered into pieces, many of them large enough to pose a danger to the space station but not large enough to track. It is unclear how many pieces of debris were created.

“What we are tracking right now, objects big enough to track — we’re talking about 10 cm (4 inches) or bigger —about 60 pieces have been tracked,” he said.

“That is a terrible, terrible thing to create an event that sends debris at an apogee that goes above the International Space Station,” Bridenstine added.

“That kind of activity is not compatible with the future of human spaceflight.”

A recent study found that 90% of the world’s oceanic plastic pollution comes from India and China, two countries which have recently entered the space race with dubious results.  Using 21st century technology, they have finally caught up to what White nations accomplished with primitive computers 60 years ago.  But as the old saying goes, “there goes the neighborhood,” as even space is now threatened by the diversity rainbow.

Of course, all of India’s space technology is either stolen or copied from White nations, so it should come as no surprise that they don’t really have full control over their space craft or satellites.  But that won’t stop them from having national pride that they’ve blown up one of their own satellites on purpose and put everyone else’s presence in space in jeopardy.  It makes us wonder how America ever got into space 60 years ago without the help of India.