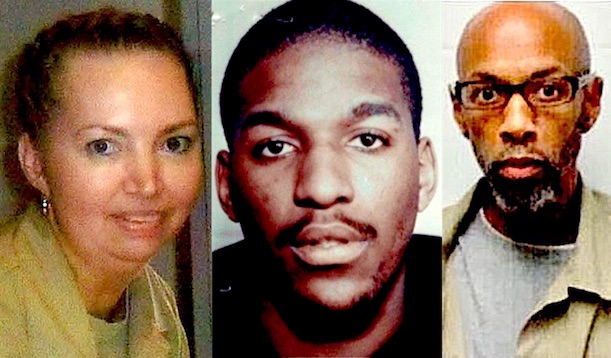 The US government executed convicted murderer Lisa Montgomery, the only woman on federal death row, early on Wednesday, after the Supreme Court cleared the last hurdle for her execution by overturning a stay — while another judge granted a stay of execution for two Black mass murderers scheduled to be executed later this week because they tested positive for COVID:

Montgomery’s execution marked the first time the US government has implemented the death sentence for a female prisoner since 1953.

Challenges were fought across multiple federal courts on whether to allow execution of Montgomery, 52, who had initially been scheduled to be killed by lethal injections of pentobarbital, a powerful barbiturate on Tuesday in the Justice Department’s execution chamber at its prison in Terre Haute, Indiana.

“No one can credibly dispute Mrs. Montgomery’s longstanding debilitating mental disease – diagnosed and treated for the first time by the Bureau of Prisons’ own doctors,” Henry said in a statement.

Montgomery was convicted in 2007 in Missouri for kidnapping and strangling Bobbie Jo Stinnett, then eight months pregnant. Montgomery cut Stinnett’s fetus from the womb. The child survived.

Some of Stinnett’s relatives have traveled to witness Montgomery’s execution, the Justice Department said.

Montgomery’s lawyers asked for Trump’s clemency last week, saying she committed her crime after a childhood in which she was abused and repeatedly raped by her stepfather and his friends, and so should instead face life in prison.

It is one of three executions the US Department of Justice had scheduled for the final full week of President Donald Trump’s administration. Two other executions scheduled for Thursday and Friday have been delayed, for now at least, by a federal judge in Washington, to allow them to recover from COVID-19.

Federal executions had been on pause for 17 years and only three men had been executed by the federal government since 1963 until the practice was resumed last year under Trump, whose outspoken support for capital punishment long predates his entry into politics.

If you aren’t familiar with the case of Lisa Montgomery — she obviously is deeply disturbed — she arranged to meet a pregnant women under the pretext of buying a puppy from her — and murdered her instead — then tore her baby out of her body and left her to die — then tried to pass the newborn off as her own.

That her case involved a pregnant victim and puppies contributed to the predictable lack of sympathy for her — either way, she is in “full tilt mode” and had no business being released back into society — and perhaps execution was ultimately the most humane way of dealing with her.

Whereas the two Black mass murderers — Cory Johnson and Dustin Higgs — had no mitigating circumstances — they murdered multiple people — women — with malice and forethought.

But luckily for both Johnson and Higgs they coincidentally tested positive for COVID — and the Federal judge — a Jamaican-born affirmative action Obama appointment — granted a stay of execution based on the preposterous notion that it would be cruel and unusual punishment to execute these vicious killers while they currently “suffered” from COVID lung infections.

There’s no evidence that these two have active lung infections aside from the bogus positive results of their COVID tests — but no doubt once they found out they were “positive” for COVID, they knew enough to start “coughing” to save their lives, on the advice of their attorneys.

Their “executions” have been “re-scheduled” for mid-March after Biden allegedly takes office — which virtually ensures that their death penalties will be commuted to either life sentences — or they will be released outright because both — allegedly — have been “model prisoners”.