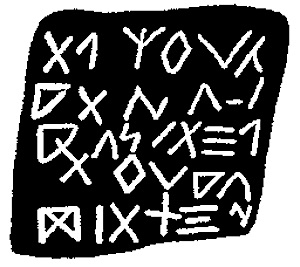 In 1877, a small boy following this father as he plowed a field on a farm in Grand Traverse County Michigan, found  the “Grand Traverse Stone” which bore an inscription that conclusively connected it to the Celto-Iberian people:

The stone is slate, ½-inch thick, and 2½ inches on each side. The symbols on the Stone are similar to those in the Pan-Mediterranean alphabet in use about the time of Christ.

D.B. Buchanan, an American epigrapher, recently undertook the task of translating the Stone. Buchanan has built up an inscription data base containing the variants of symbols used in the Pan-Mediterranean alphabet. He found that most of the characters on the Stone could be found in his data base. Buchanan then converted the Stone’s symbols to Roman equivalents and tested sound values in Greek and other Mediterranean languages. He concluded that the Stone used a late form of Vulgar Latin. His translation:

The Grand Traverse Stone therefore seems to be a financial document of some kind. Buchanan dates it between 100 BC and 100 AD.

The Grand Traverse Stone is just one of hundreds of tablets, coins, and inscriptions on stone walls that suggest European contacts with the New World in ancient times. Of course, mainstream archeologists dismiss all as deliberate frauds or objects imported and dropped accidentally by post-Columbian settlers. The Grand Traverse Stone suggesting organized trade with the New World 2,000 years ago is particularly anomalous.

The myth that Christopher Columbus was the first White man to set foot in “America” must be maintained at all costs, and all evidence contradicting that narrative is consistently attacked and dismissed with ridicule and accusations of “fraud” or “hoax”.

Not only that, any researcher who claims that these inscriptions were not created by Native Americans will be smeared as a “racist” who is attempting to steal the “historical legacy” of the indigenous peoples.

While mainstream academia will begrudgingly entertain the possibility that the Vikings explored east coast of Canada before Columbus, they absolutely refuse to acknowledge the hundreds of archeological discoveries that clearly put White men in North America as early as the reigns of King David and King Solomon.

The reason for this concealment should be obvious: if White men were here that early, those White men must have been Israelites who were clearly NOT jewish, and any mainstream academic who casts any doubts that today’s Jews are real Israelites will quickly lose their jobs and research funding.  White people must never awaken to their true identity, and anyone who tries to awaken them will be attacked and dismissed as a “racist” or “antisemitic”.