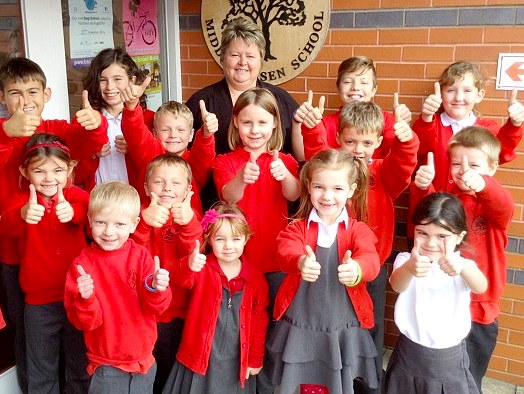 The high-performing Middle Rasen Primary school has missed out on Ofsted’s top grade after being judged “too English“:

Pupils at the rural primary lacked ‘first-hand experience of the diverse make-up of modern British society’, declared the watchdog.

However, around 97 per cent of the population in the town to which the school belongs are white.

Ofsted refused it an ‘outstanding’ rating and graded it ‘good’ instead.

It said the school was failing to do enough to ensure pupils understand the ‘cultural diversity of modern British society’ and experience ‘first-hand interaction with counterparts from different backgrounds’.

But parents complained Middle Rasen Primary in Market Rasen was being punished for factors outside its control and had effectively been told it was ‘too English’.

The row is the latest controversy over new rules on teaching ‘British values’ introduced in the wake of the Trojan Horse scandal, in which Muslim extremists tried to infiltrate schools in Birmingham.

Schools are required to ‘actively promote’ British values such as democracy, tolerance, mutual respect, individual liberty and the rule of law.

However the rules – and Ofsted’s enforcement of them – have brought criticism from some schools and faith groups. A Christian school in Reading says it was warned it could face closure for failing to invite imams and other religious leaders to take assemblies.

In another case, a Roman Catholic school in East Anglia was marked down for failing to do enough to ‘teach students about the dangers of extremism and radicalisation’, although the report was later withdrawn.

The 104-pupil Middle Rasen Primary, in the town of Market Rasen on the edge of the Lincolnshire wolds, was inspected last month.

Ofsted praised it for high standards of teaching and leadership and the courteous and enthusiastic behaviour of pupils. But the inspector said: ‘The large majority of pupils are White British. Very few are from other ethnic groups, and currently no pupils speak English as an additional language.’

It said the school should ‘extend pupils’ understanding of the cultural diversity of modern British society by creating opportunities for them to have first-hand interaction with their counterparts from different backgrounds’.

Mainstream news sites run stories like this regularly in England, and their purpose is to rub the noses of the English in it, to demoralize them, to convince them that there is no future for the White British in their own country.  There won’t be any talks or negotiations about how many English people will be tolerated in England.  That was decided a long time ago, and the answer is zero.

In 1290, the British expelled the Jews from England for over 300 years.  The Jews have never forgiven the British for this outrage, and now it’s payback time, and the British themselves will now be expelled from their own country.