Instead Of Being Executed For Espionage, Jewish Spy Jonathan Pollard Receives ‘Hero’s Welcome’ In Israel 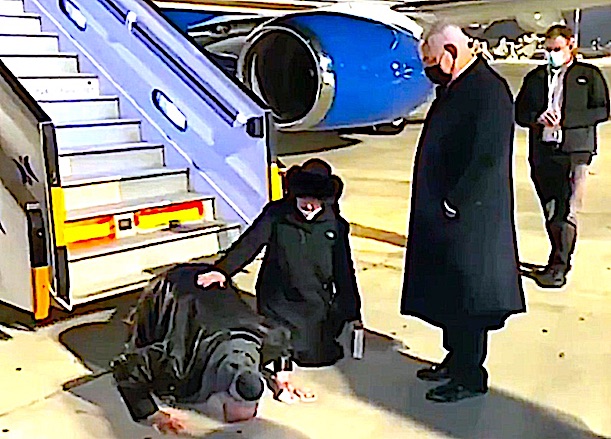 Some 35 years after his arrest and conviction for spying for Israel, Texas-born Jew Jonathan Pollard has made aliyah to Israel with the intention of staying — where he is considered a ‘hero’ rather than a criminal who betrayed America’s military secrets to a foreign — and hostile — nation:

Pollard and his wife Esther arrived on a private plane provided by American billionaire Sheldon Adelson and were greeted at the airport by Israeli Prime Minister Benjamin Netanyahu, the Jerusalem Post reported. The Pollards kissed the ground upon arrival.

A former civilian analyst for the Navy, Pollard was arrested in 1985 outside the Israeli embassy in Washington, D.C, where he tried to obtain asylum as counterintelligence agents were closing in on him for spying. The embassy turned Pollard and his then wife Anne away.

Pollard pleaded guilty to passing classified information and was sentenced to life in prison — the only American ever given that sentence for spying for an ally.

Pollard was paroled in 2015. In November, parole restrictions that had restricted his movements were lifted.

Netanyahu said two prayers with the Pollards: Shehecheyanu, the blessing traditionally recited to mark special occasions, and matir asurim, a blessing praising God as the liberator of captives.

“Now you can begin your lives anew in freedom and happiness,” Netanyahu said. “Now you are home.”

“We are ecstatic to be home at last after 35 years and we thank the people and the Prime Minister of Israel for bringing us home,” Pollard said at the airport. “No one could be prouder of this country or this leader than we are. This is a wonderful country. It has a tremendous future. It is the future of the Jewish people and we’re not going anywhere.”

To quote Jewish author Matti Friedman, author Spies Of No Country, “Double identity has always been a part of life for Jews.”

And what makes Jews so effective as spies is their ability to pass as White — or in the Arab world, many can pass as Arab — and like certain pernicious cancers, Jews are racially pleomorphic — which allows them to elude detection and “treatment”.

(President Nixon): All of the Jewish families are close, but there’s this strange malignancy now that seems to creep among them. I don’t know, the radicalism. I can imagine how the fact that Ellsberg is in this must really tear a fellow like Henry to pieces, or Garment, you know. Just like the Rosenbergs and all that. That just has to kill him. And you feel horrible about it.

(Ronald Ziegler): Couldn’t be a guy by name of Snyder.

(President Nixon): There ain’t none.

(H.R. Haldeman): It would’ve been a Rosenstein that changed his name.

(Ronald Ziegler): It is. Right. It’s always an Ellsberg or (unclear).

Nixon: They’re all Jews. Every one’s a Jew. Gelb’s a Jew. Halperin’s a Jew. But there are bad- Hiss was not a Jew. So that proves something. Very interesting thing. So few of those who engage in espionage are Negroes. Very lucky that way. And good. As a matter of fact, very few of them become Communists. If they do, they either, like, they get into Angela Davis, they’re more of an activist type, and they throw bombs and this and that. But the Negroes, have you ever noticed? There are damn few Negro spies.

Nixon: It may be.

Nixon: The Jews are born spies. You notice how many of them are? They’re just in it up to their necks.

Haldeman: Well, got a basic devious abil- deviousness, that-

Nixon: Well, also, an arrogance, an arrogance that says- that’s what makes a spy. He puts himself above the law. Other than spies for the pay. I’m talking about the spies that do it because of idealism.

And that describes Pollard — as a Jew, his loyalty to Israel transcended any fidelity to America, the nation of his birth — and yet we are constantly reminded by the ADL that a Jew like Pollard who has obvious “dual loyalties” is a “canard” — an “antisemitic” smear with no real-world proof.

But Pollard is being rewarded handsomely for his service to Israel — they are awarding him a lifetime stipend that is equivalent to a retired Mossad agent — which makes sense because that’s what Pollard essentially was — a sayanim.

In fact, Jews have attempted to twist this dual loyalty accusation into a virtue — going so far as to claim that there is nothing “more American” than U.S.-Israeli dual citizens.

But the United States could have avoided every dealing with the “dual loyalties” of Jews by simply following the example of the Christian Byzantine Empire — and simply forbidding Jews from holding any positions in the government or schools.

All Christian nations should engrave the immortal words of Nikola Tesla, the world’s greatest scientist, into their consciousness as a national motto: “Miss, never trust a Jew!“