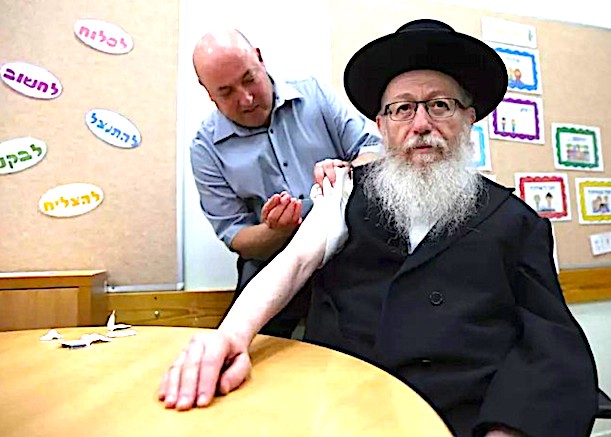 In the world’s most detailed data on how people feel after a Pfizer COVID vaccine, Israel has found that less than 0.3 percent had side effects they felt were significant enough to report to doctors — a rate that is up to an astonishing 100 times lower than the side effect rates reported in the U.S.:

The [Israeli] Health Ministry officials who released the research believe that it will provide peace of mind for many around the world who are eager to get a picture of the vaccine’s impact. They wrote that side effects are shown to be “similar in frequency and character to symptoms reported after other vaccines given to the population.”

The latter figure indicates that while the second shot is known to leave some people feeling under the weather, this rarely escalates to formal medical complaints.

Doctors responded enthusiastically to the data. “People around the world should feel reassured,” Yoav Yehezkeli, a physician and Tel Aviv University public health expert who was not involved in the study, told The Times of Israel.

Few complaints ended in hospitalization — an average of 17 patients per million after the first shot, and three patients per million after the second shot. Yehezkeli said doctors expected a few patients to have significant side effects, and he has personally treated a patient who had partial facial nerve paralysis after her second shot, but said the statistics show that incidence is low. His patient recovered.

It was the first major real-world analysis of side effects, involving many times the numbers involved in Pfizer’s clinical trials. Its findings, which are accurate to January 27, match the expectations held by health organizations around the globe on the basis of trial data.

America’s Centers for Disease Control and Prevention noted before the vaccine became available that it can cause side effects that are normally “mild to moderate,” while “a small number of people had severe side effects.”

The CDC expected the main side effects to be localized pain or broader symptoms like chills and headache, which “might feel like flu symptoms.” That was what the Israeli data found.

There were also some more unusual side effects.

Israel’s statistics should be treated as reliable because the country’s health system involves “active surveillance” of side effects, said Yehezkeli. “They are important figures because many people in Israel have been vaccinated already and the healthcare system is very organized with methods of reporting side effects,” he commented.

Despite the claims of this article, in no way, shape or form to these Israeli statistics on side effects match the data from the Pfizer clinical trials — where serious side effects were reported among 10% to 15% of participants — an order of difference of 100 times.

In order to explain away this astonishing discrepancy, they will claim that the initial side effect report in the Pfizer U.S. trials were “inaccurate” compared to the “far more rigorous” Israeli data.

In the U.S., the CDC has already reported over 300 deaths in people after receiving the vaccine — but we are to believe that no such deaths have been officially reported — or recognized — in Israel — despite a much higher rate of vaccination.

Either the data on side effects reported by Pfizer and the CDC in America is completely flawed — or the Israeli data is flawed — if not, there is only one other possibility to account for these huge discrepancy….

Months ago, we anticipated this problem facing the Israelis — would they truly subject their own population — including their much cherished elderly Holocaust survivors — to these dangerous and untested vaccines — would they allow potentially millions of Jews in Israel to be injured, maimed, and killed by these untested “vaccines”?

Early reports coming out of Israel suggested a much higher rate of people who would decline the vaccine than what most major media outlets were reporting — suggesting that the Israelis were well aware of the danger of these untested vaccines.

Thus, using Occam’s Razor on this issue — the simplest explanation is most likely the truth — we must seriously consider the probability that the extremely low incidence of serious side effects among vaccinated Israelis compared to Americans can best be explained by the fact that completely different vaccines are being used on these different populations — and that the Israelis are being vaccinated with what amounts to a placebo which causes only the most benign local side effects.

And given how protective the Israeli government is toward its population, this conclusion makes the most sense.