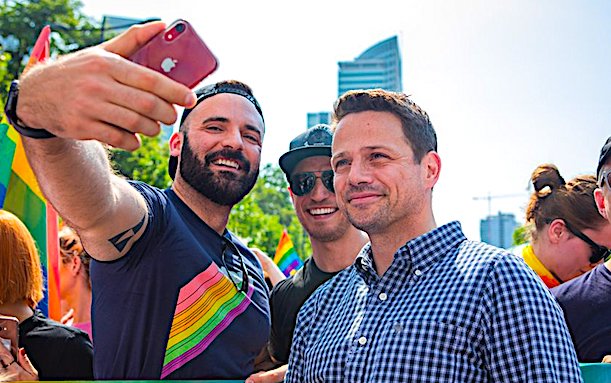 The leading opposition candidate in Poland’s upcoming presidential elections is the radical Leftist Mayor of Warsaw, Rafal Trzaskowski, who is now suing a national television network for exposing his many connections to Jewish interests:

The main opposition candidate in Poland’s presidential election is suing public broadcaster TVP for what he says are false and defamatory claims against him in the station’s news reporting. The (((Media Ethics Council))) has also condemned the coverage as antisemitic.

With the election to be held at the end of next week, TVP has been using its daily news reports to paint a negative picture of opposition candidate Rafał Trzaskowski, the current mayor of Warsaw.

News segments have portrayed Trzaskowski as serving foreign interests, contrasting him to incumbent president, Andrzej Duda, who is shown as standing in defence of Poland.

TVP has repeatedly sought to associate the opposition candidate with George Soros, whose foundation once financed a scholarship for Trzaskowski, and with the Bilderberg Group, one of whose meetings Trzaskowski attended.

In one report, TVP’s main evening news broadcast asked in a headline: “Whose interests does Trzaskowski represent?” It then suggested that he is working on behalf of a “powerful foreign lobby” linked to Soros and Bilderberg and responsible for bringing Muslim immigrants to Europe.

Other reports have sought to link Trzaskowski to “LGBT ideology”, a term that Duda has adopted as part of his election campaign. On Tuesday this week, TVP claimed that Spain was living under “the dictate of LGBT ideology” and suggested that Poland could meet the same fate under Trzaskowski.

The news broadcasts have also sought to link Trzaskowski with Jews seeking property restitution in Poland. “Will Trzaskowski allow Poland to be robbed?” asked one headline, with another suggesting he wants to “take 200 billion [zloty] from Poles”.

“The stream of money that is flowing from the state budget into the pockets of Polish families will dry up if Trzaskowski, after a potential victory in the presidential election, seeks to satisfy Jewish demands,” said TVP’s reporter.

But is Trzaskowski himself Jewish — or to avoid Talmudic hairsplitting — does he have any ethnic Jewish ancestry which might account for his immersion into nation-wrecking Marxism?

According to Wikipedia, his mother’s maiden name is Teresa Arens, a decidedly non-Polish surname.

While Ahrens or Arens has Germanic origins, as with many German surnames, it was adopted by many Jews, especially with the Arens spelling.

In fact, Arens is listed as a known Jewish surname on a Hebrew genealogy website.

The surname of the noted Jewish writer Hannah Arendt is a common variation of Aarons/Ahrens/Arens.

And Jews in Poland often have had distinctively Germanic-sounding surnames — to set them apart from the native Poles — even ones that have “converted” to Catholicism.

Of course, Trzaskowski’s mother could be a Pole of Germanic ancestry, but interestingly his step-brother Piotr Ferster also has a decidedly Jewish surname.

The Polish electorate would obviously be very interested to know whether or not Trzaskowski is serving two masters — his Polish and his Jewish ancestry.

Apparently, after the fall of communism in Poland, political candidates were pressured to prove to the public that they weren’t Jewish — Jews and communism were synonymous, as most ethnic Poles knew well.

Poland has officially declared Jesus Christ to be its King — but can the Polish voters trust an ethnic Jew — or crypto-Jew — to maintain the Christian character of Poland and defend it against “foreign interests”?