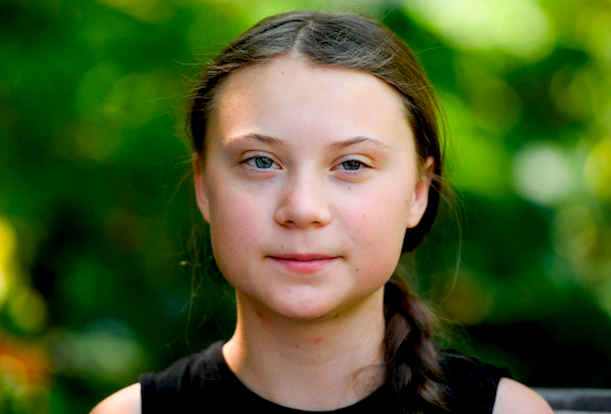 Greta Thunberg, the new poster child for promoting the Global Warming hoax, has spoken about her Asperger’s syndrome diagnosis, claiming that she considers it a “superpower” which allows her to see the world in overly simplistic terms, a typical symptom of children suffering from vaccine damage:

Thunberg, the public face of the school climate strike movement said on Twitter that before she started her climate action campaign she had “no energy, no friends and I didn’t speak to anyone. I just sat alone at home, with an eating disorder.”

She said she had not been open about her diagnosis of being on the autism spectrum in order to “hide” behind it, but because she knew “many ignorant people still see it as an ‘illness’, or something negative”.

“When haters go after your looks and differences, it means they have nowhere left to go. And then you know you’re winning!” she wrote, using the hashtag #aspiepower.

While acknowledging that her diagnosis has limited her before, she said it “sometimes makes me a bit different from the norm” and she sees being different as a “superpower”.

…In 2013, Asperger’s was folded into the wider diagnosis of autism spectrum disorder.

Tony Attwood, a world authority on Asperger’s, has said people diagnosed are “usually renowned for being direct, speaking their mind and being honest and determined and having a strong sense of social justice”….

Thunberg was diagnosed four years ago. She has acknowledged that her passion for her climate crisis work was partly down to viewing the world in stark terms.

In July, Thunberg hit back at the Australian News Corp columnist Andrew Bolt for writing a deeply offensive column that mocked her diagnosis.

He criticised her two-week trip across the Atlantic on a solar-powered yacht because, he said “she refuses to fly and heat the planet with an aeroplane’s global warming gasses.”

Thunberg responded by tweeting that she was “deeply disturbed” by the the “hate and conspiracy campaigns” run by climate deniers like Bolt.

Like autism, Asperger’s has been strongly linked to vaccine damage despite all the protestations of the pharmaceutical companies, public health agencies, and other “vaccine deniers”.  And Greta exhibits many classic symptoms of vaccine damage, including an eating disorder, black and white thinking, narcicism, and messianic feelings of grandeur.

The asymmetry of her eyes in the photo above is a common symptom of vaccine-damaged children who have had “micro strokes,” as the ground-breaking work of Dr. Andrew Moulden conclusively established.

We recently reported on a new study linking vaccine-damaged autistic children and gender dysphoria, so it should come as no surprise that these children would latch onto an overly simplistic, even cartoonish explanation for variations in the weather and temperature.  That the oligarchs who are pushing this global warming hoax would cynically use a vaccine-damaged child to gain sympathy and acceptance for their agenda is merely par for the course.

Unfortunately, autistic children like Greta commonly lack the insight into their own condition to realize they need help, and telling them they are “normal” and have “superpowers” is not helpful in the least.