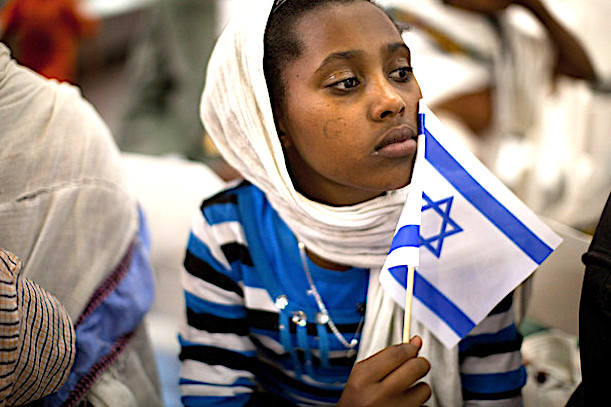 After many years denying it, Israel finally admitted in 2013 that it had been secretly injecting undesirable immigrant Ethiopian Jews with birth control drugs to involuntarily sterilize them:

The [Israeli] government had previously denied the practice but the Israeli Health Ministry’s director-general has now ordered gynecologists to stop administering the drugs. According a report in Haaretz, suspicions were first raised by an investigative journalist, Gal Gabbay, who interviewed more than 30 women from Ethiopia in an attempt to discover why birth rates in the community had fallen dramatically.

One of the Ethiopian women who was interviewed is quoted as saying: “They [medical staff] told us they are inoculations. We took it every three months. We said we didn’t want to.” It is alleged that some of the women were forced or coerced to take the drug while in transit camps in Ethiopia.

The drug in question is thought to be Depo-Provera, which is injected every three months and is considered to be a highly effective, long-lasting contraceptive.

Nearly 100,000 Ethiopian Jews have moved to Israel under the Law of Return since the 1980s, but their Jewishness has been questioned by some rabbis. Last year, the Prime Minister, Benjamin Netanyahu, who also holds the health portfolio, warned that illegal immigrants from Africa “threaten our existence as a Jewish and democratic state”.

Haaretz published an extract from a letter sent by the Ministry of Health to units administering the drug. Doctors were told “not to renew prescriptions for Depo Provera for women of Ethiopian origin if for any reason there is concern that they might not understand the ramifications of the treatment”.

Sharona Eliahu Chai, a lawyer for the Association of Civil Rights in Israel (ACRI), said: “Findings from investigations into the use of Depo Provera are extremely worrisome, raising concerns of harmful health policies with racist implications in violation of medical ethics. The Ministry of Health’s director-general was right to act quickly and put forth new guidelines.”

The motivation to sterilize these Ethiopian women couldn’t be more transparent — the Israelis were forced to accept these Black Jews as immigrants because they practiced Judaism, and Israel is a jewish homeland for Jews worldwide, and to reject them based on their race would be a public relations disaster because Jews love to portray themselves as the most “inclusive” and “tolerant” people in the world.

So they allowed these Ethiopians to immigrate to Israel, but they secretly pharmaceutically sterilized them so they wouldn’t create more Black Jews in Israel who could potentially out-breed and replace the Ashkenazi Jews who now dominate Israel.

To Jews, Blacks are useful pawns on their chessboard in their strategy for domination over all White countries, but not, of course, in Israel.

They artificially promote and elevate Blacks in society ahead of Whites so that Whites become subservient to Blacks.

They also encourage race mixing especially between Black men and White women because Jews know that mixed race people like themselves have no loyalty to one race or the other, and are therefore easily manipulated and dominated by the State.

You will not find advertisements with inter-racial couples in Israel — that’s only for the goyim.