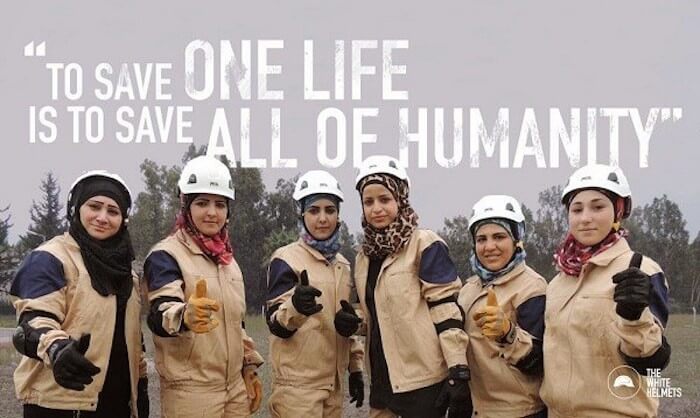 The fake “White Helmets” operation in Syria – which was largely organized and financed by jews – appears to have failed, prompting the group’s evacuation to Israel:

The White Helmets were funded by the US government and promoted by an outfit called The Syrian Campaign, which emerged from an organization called Purpose, founded by the Jew Jeremy Heimans.

On June 16, 2014, Purpose founder Jeremy Heimans drafted articles of association for The Syria Campaign’s parent company. Called the Voices Project, Heimans registered the company at 3 Bull Lane, St. Ives Cambridgeshire, England. It was one of 91 private limited companies listed at the address. Sadri would not explain why The Syria Campaign had chosen this location or why it was registered as a private company.

Heimans, through his companies Avaaz and Purpose, specializes in creating seemingly spontaneous mass popular mobilizations in pursuit of cherished left-wing Establishment causes. He once made an interesting admission about himself on Twitter.

The Syria Campaign, with the White Helmets as their pliant propaganda tool, have agitated for the removal of Assad – exactly the course favored by Israel – throughout the recent conflict. It is therefore appropriate that they should now be evacuated to Israel.

The White Helmets’ slogan was also fitting: “To save one life is to save all of humanity”. This phrase is a variant of one found in the Koran, but also the Jewish Talmud. The Muslims took it from the Jews, or rather were given it by the Jews, just as this fake Muslim group was managed by Jews for Jewish purposes.

So Heimans, the jewish guy who founded and funded the “White Helmets” describes himself as a “sexual Bolshevik,” and the U.S. State Department takes this guy seriously and allegedly requests that this deviant’s fake opposition group be “rescued” by our “special” friends, the Israelis – no doubt at U.S. taxpayers’ expense.

And Israel, the country that created this entire war in the Middle East, comes off as the world’s savior.