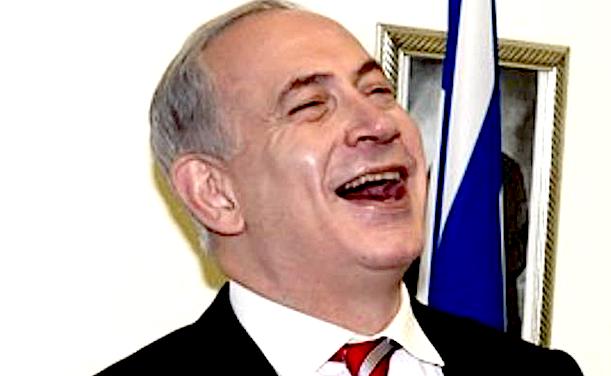 Late 1970s: US receives intelligence [from Israel, of course, ed.] that the Shah had “set up a clandestine nuclear weapons development program.”

1979: Shah ousted in the Iranian revolution, ushering in the Islamic Republic. After the overthrow of the Shah, the US stopped supplying highly enriched uranium (HEU) to Iran. The revolutionary government guided by Ayatollah Ruhollah Khomeini condemned nuclear weapons and energy, and for a time stopped all projects.

Though Israel had secretly done business with the Islamic Republic after the 1979 revolution, seeking to cultivate a Persian wedge against its local Arab enemies, the early 1990s saw a concerted effort by Tel Aviv to portray Iran as a new and existential threat.

1992: Israeli Foreign Minister Shimon Peres tells French TV that Iran was set to have nuclear warheads by 1999. “Iran is the greatest threat and greatest problem in the Middle East,” Peres warned, “because it seeks the nuclear option while holding a highly dangerous stance of extreme religious militancy.”

The same alarm bells were already ringing in Washington, where in early 1992 a task force of the House Republican Research Committee claimed that there was a “98 percent certainty that Iran already had all (or virtually all) of the components required for two or three operational nuclear weapons.”

Similar predictions received airtime, including one from then-CIA chief Robert Gates that Iran’s nuclear program could be a “serious problem” in five years or less. Still, the bureaucracy took some time to catch up with the Iran threat rhetoric.

1992: Leaked copy of the Pentagon’s “Defense Strategy for the 1990s” makes little reference to Iran, despite laying out seven scenarios for potential future conflict that stretch from Iraq to North Korea.

1995: Israeli parliamentarian Benjamin Netanyahu tells his colleagues that Iran is 3 to 5 years from being able to produce a nuclear weapon – and that the threat had to be “uprooted by an international front headed by the US.”

1995: The New York Times conveys the fears of senior US and Israeli officials that “Iran is much closer to producing nuclear weapons than previously thought” – about five years away – and that Iran’s nuclear bomb is “at the top of the list” of dangers in the coming decade. The report speaks of an “acceleration of the Iranian nuclear program,” claims that Iran “began an intensive campaign to develop and acquire nuclear weapons” in 1987, and says Iran was “believed” to have recruited scientists from the former Soviet Union and Pakistan to advise them….

This fake news campaign has been ongoing for literally the last 40 years, and no one seems to notice or care.

If Pakistan can build a nuclear bomb, surely Iran doesn’t need 40 years to do it, but if we are to believe Israeli “intelligence,” Iran will have their dreaded nuke sometime next week.

No doubt President George W. Bush’s army of jewish advisors told him, “See, in my line of work you got to keep repeating things over and over and over again for the truth to sink in, to kind of catapult the propaganda.”

The Jews pulled the same kind of fake news campaign about 6 million Jews being murdered in a “Holocaust” when they first announced it to the world almost 50 years BEFORE World War II even began, and they just kept repeating it until the Big Lie finally stuck.

And for the zionist Jews, Iran is the big prize, the last of the dominoes in the Middle East that must fall to ensure Israel’s unrivaled dominance, and Iran’s destruction will be justified by any means necessary, including a potential false flag “nuclear incident” in Europe or America orchestrated by Israel and blamed on Iran, as Netanyahu seemed to imply recently.