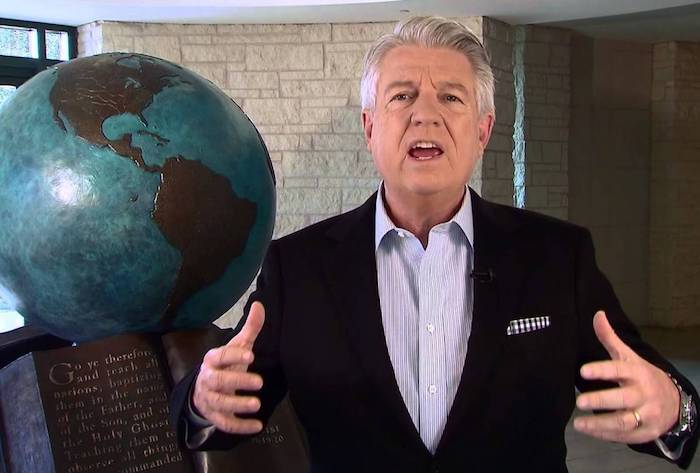 The Friends of Zion Museum in Israel has formally honored Dr. Jack Graham, Pastor of Prestonwood Baptist Mega-Church in Plano, Texas, for his unwavering support of the ersatz State of Israel and Jews in general:

For decades, Graham has conveyed a pro-Israel message to millions of Christians from Prestonwood Baptist as well as through serving as president of the Southern Baptist Convention, the largest American Protestant denomination with over 16 million members.

The pastor is currently leading a Holy Land tour for congregants from the church, home to over 45,000 members, many of whom visit Israel annually with him and his wife. Graham, his family and congregants toured Friends of Zion’s state-of-the-art museum, which features seven exhibitions including: interactive characters, 3D technology, touch screens, and surround sound. The FOZ Museum tells the heroic stories of the non-Jews who have assisted the Jewish people throughout the Zionist movement, as well as during critical times like the Holocaust.

After their tour, Graham was honored for his support of Israel and the Jewish people. The pastor stated that he was “excited by all the technology and deeply moved by [Friends of Zion’s] inspiring message of celebrating a unique perspective of Zionism. My congregants were inspired as well. Thank you, Dr. Mike Evans – the Friends of Zion Museum: it is a must see for all visitors to Israel!”

In addition to serving as president of the Southern Baptist Convention, Graham is a member of President Donald Trump’s “Faith Initiative” advisory board and hosts the show PowerPoint, which is seen by millions on a weekly basis. He also served as honorary chairman of the 2015 National Day of Prayer.

The FOZ Museum recently surpassed 54 million members, making it one of the largest pro-Israel sites in the world. The museum is also known for its state-of-the-art technology and has become one of the central institutions in the State of Israel, influencing the world and strengthening Israel’s relations globally. The Friends of Zion Heritage Center is a $100 million project, which is currently building a think tank, research center, ambassador institute and online university.

The quickest road to fame and fortune for a “Christian” pastor runs through Tel Aviv, and clearly Pastor Graham has accepted his thirty pieces of silver from the Jews.

Both Jerry Falwell and John Hagee received private jets as gifts from Israel for their “support” and promotion of the Zionist annexation of Palestine.

Zionism is big business for Christians with material ambitions, and the Jews are more than willing to lavish them with bribes to spread their ideology far and wide among Christians brought up on the jewish-financed Scofield Bible.

Most well-meaning Christians have no clue what the New Testament really says about Jews because their pastors know not to bite the hand that feeds them.

All they ever hear is that “Jesus was a Jew,” and “God will curse you if you curse the Israelis,” neither of which is true, but since few Christians bother to read their Bibles critically or cross-check their often-misleading translations, they are shocked when other Christians point out the truth to them.

And the “successful” careers of pastors like Jack Graham rest on this continuing ignorance of their flocks.