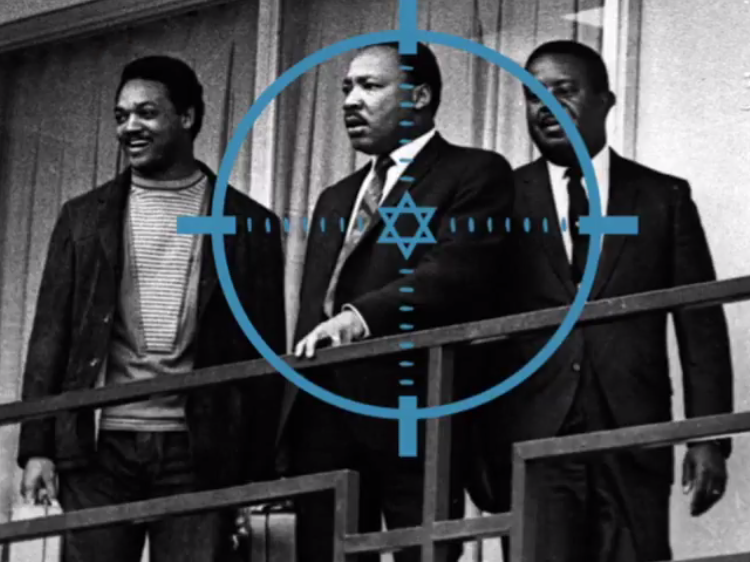 The pro-Israel lobby has been working feverishy to change the pro-Palestinian support of the  jewish-funded domestic terror organization, Black Lives Matter, by falsely claiming that Martin Luther King was pro-Israel:

Black Lives Matter (BLM) adopted support for the international Boycott Divestment and Sanctions movement (which calls on Israel to end its illegal occupation of Palestinian lands) in 2016, thus exposing itself to the Israeli governments’ extensive BDS-quashing efforts.

Exclusive footage from Al Jazeera’s censored ‘The Lobby-USA’ documentary released by the Grayzone Project exposes some of these tactics. The long-awaited documentary’s release has been stalled for almost a year due to political pressure.

“The major problem with Israel is with the young generation of the black community,” Judith Varnai Shorer, Israeli consul general in Atlanta, explains in the footage, before going on to boast of a dinner she held with “very important” black community leaders whom she said can be part of Israel’s “activities.”

…Andy David, the Israeli consul general in San Francisco, California, tells the group he got Martin Luther King’s former lawyer Clarence B Thomas to become an Israeli ally. He boasts that, “because of that relationship, [Thomas] published three articles in the Huffington Post explaining why [BLM’s] agenda was hijacked.”

“Martin Luther King will turn in his grave if he saw the anti-Israel tendencies or policies that are starting to emerge within Black Lives Matter,” David later claims.

Back in 2014, Thomas claimed King would have been a supporter of Israel as he collected an award at the Israeli consulate in New York where he warned of the danger of a ‘third intifada’ of boycott.

The fact of the matter is that not only was Martin Luther King a supporter of  the Palestinian cause, it was that support that may have ultimately led to his assassination by the Israeli Mossad, as is explained by the late author, Michael Collins Piper, in the video below.

James Earl Ray, the White man falsely accused of the murder, believed that Israel’s fingerprints were all over the assassination of Martin Luther King.

So it’s no surprise that Jews today are desperate to falsely convince Black people that their greatest hero supported Israel and its genocide of the Palestinian people.

In one of the great ironies of history, Jews kill MLK, then years later Jews fund BLM and convince Blacks to support Israel.

No wonder Jews can always count on the Black vote.