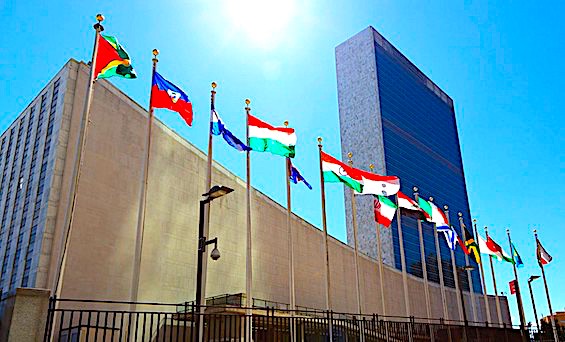 UN antisemitism envoy Miguel Moratinos and Ambassador to the UN Gilad Erdan have agreed to work together to push for the United Nations to adopt a formal definition of antisemitism, which would, in effect, make any U.N. criticism of Israel “antisemitic”:

Erdan and Moratinos have met several times, and on Friday, they agreed to work together on promoting a definition of antisemitism. Erdan is pushing for it to be the International Holocaust Remembrance Alliance’s (IHRA) working definition.

Thirty countries have already adopted the IHRA working definition of antisemitism, which was drafted in 2016. It states: “Antisemitism is a certain perception of Jews, which may be expressed as hatred toward Jews. Rhetorical and physical manifestations of antisemitism are directed toward Jewish or non-Jewish individuals and/or their property, toward Jewish community institutions and religious facilities.”

Moratinos is expected to meet with major Jewish organizations in New York this week to further delve into the matter.

“Rising antisemitism around the world requires us to act with additional tools and increase cooperation with the international community to create enforcement tools against expressions of antisemitic hatred,” Erdan said.

“The UN’s adoption of an official definition could reduce some of the incitement against Israel in the UN that some member states have grown accustomed to, and it could grant all UN bodies the ability to better fight antisemitism,” he added.

The IHRA definition is not legally binding and is meant to be a tool for countries to identify hatred and discrimination against Jews.

However, some anti-Israel and far-left Jewish groups have come out against the definition because the list of examples of antisemitism include “targeting of the State of Israel, conceived as a Jewish collectivity.”

“Criticism of Israel similar to that leveled against any other country cannot be regarded as antisemitic,” it adds.

Some of the examples of antisemitism on the list include “denying the Jewish people their right to self-determination, e.g., by claiming that the existence of a State of Israel is a racist endeavor” and “applying double standards by requiring of it a behavior not expected or demanded of any other democratic nation,” as well as “drawing comparisons of contemporary Israeli policy to that of the Nazis.”

Earlier this year, the Progressive Israel Network, which includes Americans for Peace Now, J Street, New Israel Fund and other groups, said it opposes the legal adoption of the IHRA definition because it could be “misused and exploited to instead suppress legitimate free speech, criticism of Israeli government actions, and advocacy for Palestinian rights.”

There you have it — a bald admission that Jews want the U.N. to accept this definition of antisemitism to silence its members from criticizing or holding Israel accountable for its treatment of the Palestinian people.

Why would the U.N. ever agree to such an absurd self-censoring definition?

Why do White countries like Scotland agree to pass laws making it illegal for them to complain about being ethnically cleansed from their own nations?

Do you think Israel would ever pass laws that would make calling Palestinians “terrorists” a hate crime?  Need we ask?

Many Jews and their political lackeys on the Left openly claim that the United States is a “racist endeavor” built on the genocide of the native Indians and the enslavement of Black Africans — but those accusations aren’t considered “hate”.

Yet leveling similar accusations against Israel is “hate”.

According to the radical Left, White people do not have the right to have nations for themselves — that protect White people, their culture, heritage and posterity.

That would be “White supremacy”.

Every other people on earth — especially Jews — have the inalienable right to a diversity-free ethnic homeland.

Jews have made it completely politically acceptable to accuse America — and the entire White race — of every crime against humanity under the sun — but only as long as you don’t include Jews in your definition of White people.

Imagine White people being so “fragile” that they wanted to outlaw any criticism of them — after all, they have the power and numbers to do so.

Perhaps this “white fragility” we are hearing so much about isn’t so white after all.