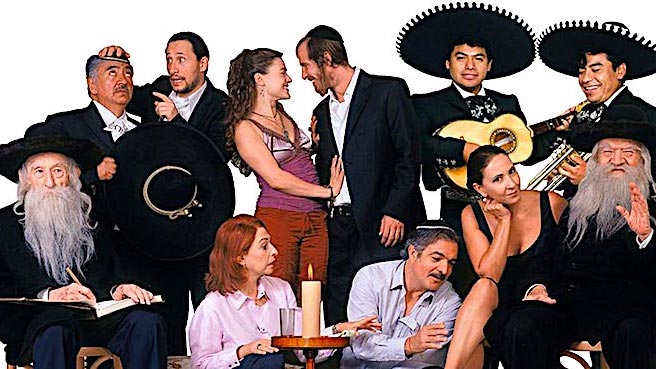 A new law proposed to the Israeli Knesset would create an official memorial day for the victims of the Inquisition — who fled Spain and Portugal for the New World where they were instrumental in creating the Mestizo “race”:

Created by the Catholic Church in the Middle Ages to root out heresy, the Inquisition brutally persecuted Spanish Jews who had been forcibly converted to Christianity but continued to practice Judaism in secret, becoming known in Hebrew as Anusim (forced ones).

The law was proposed by Member of Knesset Michal Cotler-Wunsh and would create a Day to Commemorate the Victims of the Inquisition, which would be held on November 1, the date the Spanish Inquisition was formally established in 1478. Co-signatories to the bill include Knesset members from most of Israel’s major parties, including the governing Likud party.

The day will be marked with educational activities that will teach the history of the Spanish crypto-Jews, as well as the mass expulsion of Jews from Spain and Portugal. Knesset discussions of the issue will also be held.

In addition, the Minister of Diaspora Affairs will host an official state ceremony to mark the occasion.

Cotler-Wunsh said of the proposed law, “This bill will create a day of memory and reminder in the Knesset for us to recognize this tragic event in our collective history and learn from it, in order to ensure ‘never again’ in a world of ‘again and again.’”

“It also provides us with an opportunity to connect with the descendants of those affected by the Spanish Inquisition, in Israel and in the diaspora, based on our shared history and values,” she added.

David Hatchwell, President of the Fundación Hispanojudía (Hispanic-Jewish Foundation), which promotes ties between Jews and the Hispanic world, said, “The Spanish-speaking world, whether in Spain or in Latin America, is gaining a greater understanding of its common roots, culture, and traditions with the Jewish people.”

“The Inquisition was a dark chapter for humanity and in both of our peoples’ history,” he added. “It should be remembered as pure religious fanaticism and intolerance.”

“Nevertheless, we should also use these historic events to chart a more positive future between the Spanish-speaking world and the Jewish people based on respecting diversity emulating the modern State of Israel,” he said.

Ashley Perry, who leads the organization Reconectar and helped author the bill, commented, “There are tens, if not hundreds, of millions of people around the world who have both Jewish and Hispanic ancestry, and the Inquisition played a major role in the disconnection of our peoples.”

“This law is a vital recognition of a reign of terror which still has such a great effect on so many people even today, many without knowing,” he said. “This Day of Commemoration will hopefully not just be for Israelis, or even just for Jews, but for all those whose ancestors were hunted, tortured or prosecuted by the Inquisition.”

Jewry has been making a concerted effort to draw Hispanics into the Jewish fold — convincing a hundred million Latinos that they are sympathetic crypto-Jews would greatly benefit both Leftist and Zionist Jews.

When the Jews were expelled from Spain and Portugal, the vast majority of them migrated to the New World — many remained conversos or cryptos, and many have mistaken them for ethnic White Spanish.

And it was these cryto-Jews who created the Mestizo populations in Central and South America — by inter-breeding with the local native Indian populations — the Spanish conquistadors brought very few of their own women to the New World.

One survey claimed that 25% of Latinos had some Jewish ancestry, but the actual numbers are most likely far higher.

Another study showed that over 4,000 Spanish surnames were common among those with some Jewish ancestry.

This goes far to explain why Jews in America have been actively involved in helping Latinos apply for citizenship in Spain.

It also sheds new light on why the Jewish supremacist organization, the Anti-Defamation League, has been working with the Mexican government to aid and abet the flooding of the southern U.S. border with Mestizos from all over Latin America.

Of course, Jews are quick to point out that these Latinos are not hallachically Jewish — by rules of inheritance set down by the rabbinical courts — but they are certainly genetic Jews — as are the majority of Jews today because of the 50% out-marriage rates among Jews.

A famous example of one of these crypto-Latinos is the former C.I.A. chief, James Jesus Angleton, whose mother was Mexican — Angelton was instrumental in helping cover up the Israeli role in the assassination of JFK — for which the Israelis rewarded him with two memorials –  outside Jerusalem and near the King David Hotel.