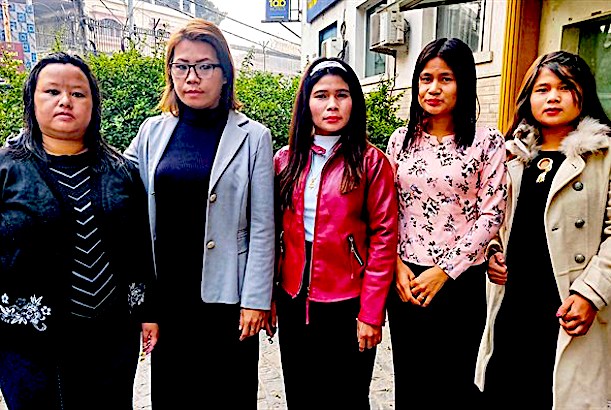 This Sunday — January 3 — four adult females and one girl from the Bnei Menashe community of northeastern India will make Aliyah to Israel — the result of a government decision that was promoted by the Minister of Aliyah and Integration, MK Pnina Tameno-Shete in cooperation with the Shavei Israel organization:

The arrival of sisters Rut (28), Dina (21), and Avigail Lhanghal (13) from Manipur, along with Malka Zote (37), and Tiferet Renthlei (33) from Mizoram, follows that of the 252 Bnei Menashe who already made Aliyah to Israel two weeks ago.

After undergoing bureaucratic processing at Ben-Gurion Airport, the immigrants will be sent to temporary quarantine according to Ministry of Health restrictions. Subsequently, they will join the other recent Bnei Menashe immigrants who are being housed at Shavei Israel’s absorption center in Nordia, near Netanya, before settling in the city of Nof HaGalil.

“We are happy to start 2021 with the Aliyah of five more Bnei Menashe to the land of their ancestors, the Land of Israel, where they will join their family members who already live here,” said Shavei Israel Chairman and Founder, Michael Freund. “We are confident that 2021 will prove to be a significant year for the continued Aliyah of the Bnei Menashe, as we are planning to bring more than 500 new immigrants from the community to Israel, which is double the number we were able to bring in 2020.”

The Bnei Menashe, or ‘Children of Manasseh’, claim descent from one of the Ten Lost Tribes of Israel, who were sent into exile by the Assyrian Empire more than 27 centuries ago.

Their ancestors wandered through Central Asia and the Far East for centuries, before settling in what is now northeastern India, along the borders of Burma and Bangladesh. Throughout their sojourn in exile, the Bnei Menashe continued to practice Judaism just as their ancestors did, including observing the Sabbath, keeping kosher, celebrating the festivals and following the laws of family purity. They continued to nourish the dream of one day returning to the land of their ancestors, the Land of Israel.

Thus far, Shavei Israel has made the dream of Aliyah, immigration to Israel, possible for over 4,000 Bnei Menashe and plans to help bring more members of the community to Israel. Currently, there are 6,500 Bnei Menashe awaiting their return to the Jewish homeland.

While it is absolutely preposterous that these sub-continental Indians are legitimate Israelites, it is good news that the ersatz State of Israel is dedicated to the “browning” of its so-called “mixed multitudes”.

Of course, only descendants of the tribe of Judah are traditionally called “Jews” — but let’s no let biblical accuracy get in the way of a feel-good story of diversity.

There’s no explanation given how these Indians — and their tiny tribe of “Jews” — fulfill the great prophecy of Manasseh — that they will come out of another great nation — Ephraim — and became an even greater nation.

The symbols of Manasseh are arrows and a cross — the same symbols we now see on the Union Jack, and the flags of Australia and New Zealand, and even  the flag of the Southern Confederacy — and we see the arrows in the United States’ coat of arms — the true symbol of modern-day Menasseh.

This article also fails to explain how Israelites came to look like sub-continental Indians — obviously through race mixing — which is strictly forbidden among Israelites (Deut 23:2) — and the progeny of race mixing — bastards or ‘mamzers’ in Hebrew — shall never enter the congregation of God — and yet these fake Jews in Israel are doing just that — admitting them into the congregation of “Israel”.

A Portuguese Jew named Manoel Dias Soeiro, who deceptively changed his name to the more biblical-sounding Israel ben Mennasseh, wrote a 1652 book titled Hope Of Israel, in which he spuriously claimed that the Indians of the New World — in South America — were the lost tribe of Menasseh.

Just exactly how the Tribe of Menasseh could be both the New World amer-Indians and the subcontinental Indians on the Burmese border is, of course, not explained — because it makes a mockery of biblical prophecy which is the specialty of Talmudic Jews.