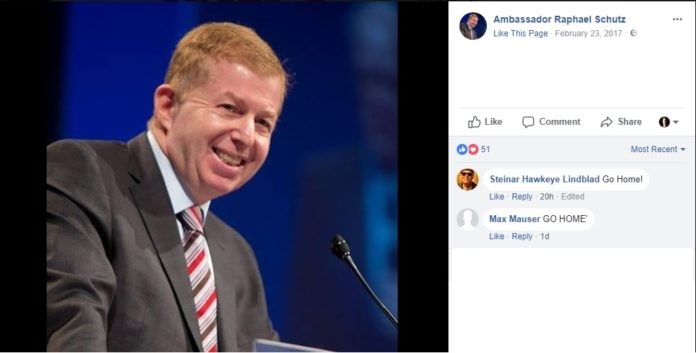 “Israeli ambassador Raphael Schutz has stirred up protests from Norwegian politicians both the right and the left after accusing Norwegians who criticize Israel’s policies of being descendant of Quisling, the Nordic nation’s infamous Nazi ally during WW2.

Reacting to critical comments from Norwegians, Schutz claimed that Norway was part of a “civilization that persecuted Jews for centuries and cooperated with the Nazis” and was today acting accordingly by “declaring the only Jewish safe haven illegal.”

Schutz wrote on Facebook that Norway deserves to be reminded about the “dark pages of its recent history”.

Apparently, Israel is unique in the world in that it believes that it is the only country above any form of criticism. If you criticize Israel for their racist behavior toward the Palestinians, then you must be the real racist or anti-semite–or worse, you must be a Nazi. Of course, their actions are indefensible, which is why they have no other way to defend themselves except by bringing up irrelevant WWII history. No one is buying this canard any longer.