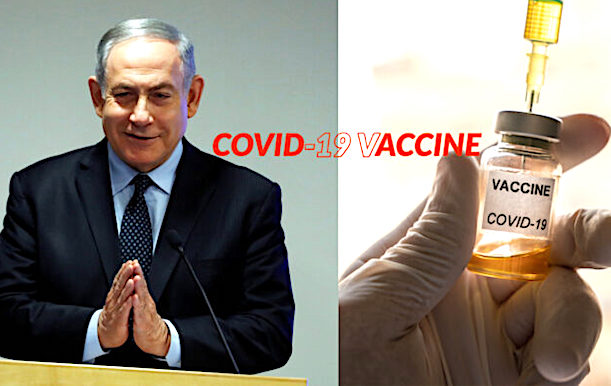 David Friedman, the U.S. ambassador to Israel, visited Israel’s bio-warfare “defense” laboratory and was briefed on a coronavirus vaccine prototype for which it is seeking U.S. Food and Drug Administration (FDA) regulation, a US official said on Wednesday:

The vaccine being developed at the Israel Institute for Biological Research (IIBR), in rural Ness Ziona, began animal trials in March. A source familiar with IIBR activities said human trials were expected before year’s end.

A US official described Ambassador David Friedman’s visit to the IIBR on Monday as part of the two allies’ “robust fight against the coronavirus.” Israel’s Defense Ministry, which oversees the IIBR, had no immediate comment.

The IIBR is seeking FDA vaccine regulation, the US official added. Asked whether Friedman would help in this regard, the official said only that the envoy “is working tirelessly to ensure that things that (can) help the American people can get to them in the most effective and efficient way.”

The FDA website says its “regulations for the development of vaccines ensure their safety, purity, potency and effectiveness” and could pave the way for a vaccine’s use in the United States.

We reported last year how David Friedman along with U.S. Secretary of the Treasury, (((Steve Mnuchin))), were pushing to have a ‘satellite’ office of the FDA opened in Israel to allegedly help get Israeli drugs on the U.S. market faster.

Now we perhaps know why.

The Israel Institute for Biological Research was founded as the biological warfare department of the Haganah, the Jewish-Israeli terrorist group that had planned to poison the water supply in Germany at the end of World War II to murder millions of  Germans in retaliation for the alleged “Holocaust”.

And, yes, they have been known to develop vaccines for the purposes of waging biochemical warfare.  To quote Wiki:

The institute is widely suspected of being involved in developing chemical and biological weapons. It is also assumed that the Institute develops vaccines and antidotes for such weapons. While refusing to confirm it, Israel is widely suspected of having developed offensive biological and chemical weapons capabilities, and the Israeli intelligence service Mossad is known to have used biological weapons in assassination missions. Israel has not signed the Biological Weapons Convention and has signed but not ratified the Chemical Weapons Convention.

The idea that the United States is even considering approving an experimental coronavirus vaccine created by the Israeli biowarfare institute should be front page news worldwide —  but that might raise a few troublesome eyebrows.

After all, only an antisemite wouldn’t trust the Israelis to have our best interests at heart.