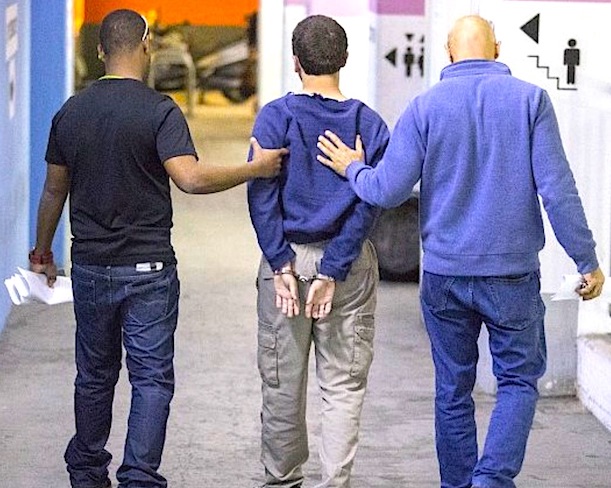 In an extreme example of ‘White privilege,’ the Israeli Supreme Court ruled on Thursday to significantly reduce the sentence of an extremely dangerous and unstable dual U.S.-Israeli citizen convicted of hoaxing US Jewish community centers and other targets around the world with thousands of bomb threats:

While the top legal body rejected an appeal against the conviction of 21-year-old M., who is autistic and whose full name is withheld by a gag order in Israel, it did agree to cut his suspended prison sentence from 10 to seven years.

“On the one hand, the severity of the offenses committed by the appellant is obvious. He committed grave acts of unprecedented scope, using sophisticated technological means…. In his actions, the appellant compromised public safety and well-being,” Justice George Kara wrote.

“On the other hand, the appellant committed a substantial portion of the offenses when he was a minor, with no criminal record,” he added. “Substantial weight must be given to the fact that the appellant is on the autistic spectrum.”

While Kara recognized that the maximum-security prison where M. has been held since his March 2017 arrest is not necessarily an appropriate setting for someone with his condition, he concluded that the 21-year-old — who has attempted to escape custody — poses too great a security risk to place him in a “therapeutic setting.”

M. was convicted of making over 2,000 threatening calls to mostly U.S. schools, hospitals, and Jewish community centers from 2015 to 2017, using an online calling service that disguised his voice and allowed him to hide his identity. He also targeted hundreds of airlines and airports, malls, and police stations, in the US, Canada, the UK, New Zealand, Australia, and Britain, and tried to extort Republican State Senator Ernesto Lopez from Delaware.

In addition to the bomb threats, M. offered his extortion services through an online black market. Court documents unsealed in August linked him to a post on the now-shuttered illicit marketplace AlphaBay, advertising a “School Email Bomb Threat Service.” The ad offered to send customized threats to schools for $30, plus a surcharge if the buyer seeks to have someone framed.

His threats caused fighter jets to scramble, planes to dump fuel and make emergency landings, schools to evacuate, and numerous other chaotic consequences. In some cases, he allegedly threatened to execute children he claimed to be holding hostage. Police also found hundreds of photos and videos of child pornography on his computer.

The hoax bomb threats, which came in the midst of the ongoing far-right surge in the United States, sent a chill through Jewish communities, stoking fears of anti-Semitic attacks.

M. was found guilty in June 2018 of hundreds of counts of extortion, publishing false information that caused panic, computer offenses, and money laundering, among other charges. That November, he was sentenced to 10 years in prison and fined NIS 60,000 ($16,068).

In addition to the prison sentence in Israel, M. has been indicted on hate crimes charges by the US Department of Justice that would carry a hefty prison term there.

But, of course, he won’t spend a day in a U.S. courtroom or prison once he’s served his time in Israel, so let’s not pretend that’s even a possibility.

There’s no evidence that autism causes this kind extreme criminal behavior, so using it as a defense to mitigate his crimes is beyond all common sense.

In fact, Dr. Matthew Lerner, who is jewish and has autism, is the world’s expert on autism and violence, and he has found NO causal relationship between the two.

In reality, his sentence has been reduced because his thousands of bomb threats were good for the Jews.  They struck fear into Jews worldwide, thinking that they were coming from the ‘White supremacists’ about whom the ADL obsesses.

The bomb threats initially were presumed by the jewish press to be ‘antisemitic’ in nature, which always plays right into the hands of the Jews who are looking for any excuse to clamp down on ‘antisemitic violence’ with even more draconian laws to complete gut our constitutionally-guaranteed freedoms.

From a Jewish perspective, this pedophile has done nothing wrong except for getting caught and drawing unfavorable attention to his fellow Jews.

He’s being punished merely over  public relations concerns, not anything intrinsically wrong with his actions even if they were directed mostly toward jewish institutions.

The chances that this pedophile will, in fact, target children once he is released from prison are extremely high, but that’s also not a big concern in Israel where pedophiles are welcomed and sexual predators are given a slap on the wrist by the courts.

Imagine if an autistic ‘White supremacist’ had sent out 2,000 bomb threats to Jewish institutions.  Do you think they’d ever let him out of jail?  Ever?  That, folks, is textbook ‘White privilege’.