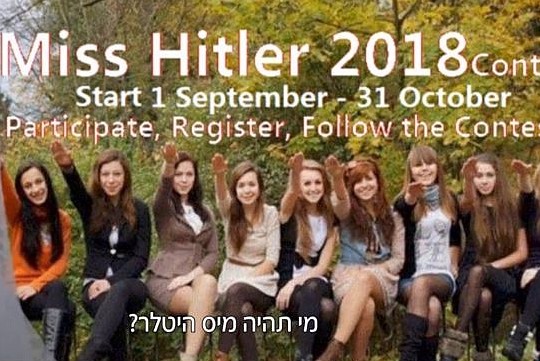 Vocative, a little-known but powerful Israeli company that monitors “hate” on the internet, has successfully gotten a humorous Miss Hitler 2018 beauty contest shut down — in Russia:

The competition, hosted by the Adolf Hitler page on VKontakte (also known as VK), Europe’s largest social media network with half a billion users — a Russian equivalent of Facebook — drew contestants from Germany, Italy, Russia, and the US, Hadashot television news reported.

After the Israeli TV network contacted VKontakte, the company suspended the competition and issued a statement condemning hate speech.

The competition site was replaced with a page saying, “This community has been blocked due to calls to violence.”

The group had encouraged women to enter the competition by posting sexy Nazi-themed selfies together with an entry explaining why they “love and revere the Third Reich of Adolf Hitler.”

Hundreds of users voted in an online poll while thousands viewed the competition’s pages. Entrants used their full names and unabashedly wrote of their neo-Nazi values and the organizations to which they belonged.

Women sent in photographs of themselves performing Nazi salutes, at neo-Nazi rallies, or posing with Nazi memorabilia.

One of the now-blocked pages had outlined the objectives of the competition, which included: “Promoting Hitlerian culture; encourage interaction between the Hitlerian community; clear the image of Adolf Hitler, show beauty of Hitlerian culture” and to “protect and defend women.”

The competition was uncovered by the Israeli company Vocative which analyzes online content in 15 languages, Hadashot reported.

In 2014, Vocative uncovered a similar competition hosted by the same social media network, which was also eventually blocked.

When a humorous online beauty pageant is shut down for inciting racial violence, you know you are being ruled over by Jews.  Jews have a virtual monopoly on humor and comedy, and they have become the final arbiters of what is funny and what is “hate” speech.  In a politically-correct world dominated by jewish Bolsheviks, humor is impossible — and apparently illegal in many cases.

If there were truly any evidence whatsoever that this beauty contest had any calls for violence against any Jews, you can be assured that this article would have quoted them — but there was none, and that is why it’s not held up for everyone to gasp at.

But the more Jews censor us, the more blowback they will get — in the form of thousands of Miss Hitler contests all over the world.

Vladimir Putin was asked about this international crisis, but he declined to comment: