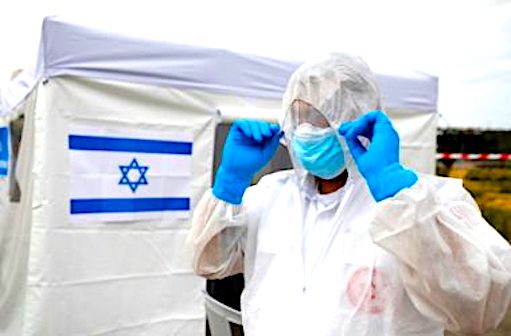 The Israeli Mossad announced the purchase of 10 million medical masks on the international black market to protect Israelis against the coronavirus, The Jerusalem Post has learned:

Due to the sensitivity of the information, the Post could not report it until they arrived in Israel on Monday. But it did note in a report on Friday that significant new acquisitions were on the way.

In addition to the 10 million medical masks, the Mossad brought a few dozen ventilators, tens of thousands of test kits and some 25,000 N95 surgical masks that are designed to protect the wearer from airborne particles and liquid. It expects to bring more medical equipment to the country. Mossad Director Yossi Cohen heads a special command center along with other national security units and the Health Ministry.

Cohen succeeded in bringing 100,000 test kits to Israel two weeks ago, with an estimated four million on the way.

The kits were obtained from countries with which Israel does not have diplomatic relations, the Post learned at the time. An Al Jazeera report said the countries were in the Persian Gulf, which could be one reason why the Mossad took the lead.

So, in other words, the Mossad somehow acquired this huge shipment of medical supplies not from its friends, but rather from its alleged enemies in the Middle East.

While some countries, like Spain and Italy, are left scrambling for supplies as patients allegedly drop like flies, Israel makes a few phone calls to its ‘enemies’, and within a week, they have more than enough medical supplies to cover most of its population.

And notice that the Israelis, our ‘closest friend and ally’, made no public offer to America or any other country, to help us acquire much-needed supplies from their secret black market pipeline.  Russia offered, but not Israel.

No, Israelis can publicly announce that they are literally sending help to treat not suffering Israelis but rather ‘suffering’ Jews in Italy, while the general Italian population is left out in the cold — and the world press doesn’t dare call out these Jewish Supremacists and Racial Exclusionists.

Imagine how the jewish-controlled media would react if Donald Trump announced that the U.S. was sending medical help only to White Americans who are living in foreign countries, but wasn’t going to help any those countries themselves.

This is that ‘white’ privilege we’ve been hearing so much about.