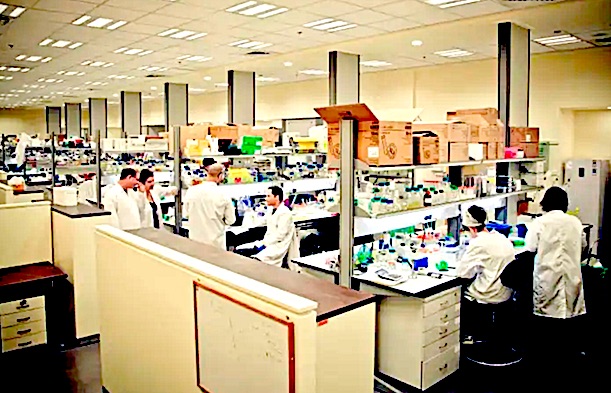 Despite the fact that vaccines often take 10 to 12 years to develop, Israeli researchers would have us believe that because of  some ‘pure luck’ they could have a new vaccine for the coronavirus ready for the market within the next 90 days:

Israeli scientists are on the cusp of developing the first vaccine against the novel coronavirus, according to Science and Technology Minister Ofir Akunis. If all goes as planned, the vaccine could be ready within a few weeks and available in 90 days, according to a release.

“Congratulations to MIGAL [The Galilee Research Institute] on this exciting breakthrough,” Akunis said. “I am confident there will be further rapid progress, enabling us to provide a needed response to the grave global COVID-19 threat,” Akunis said, referring to the disease caused by the novel coronavirus.

For the past four years, a team of MIGAL scientists has been developing a vaccine against infectious bronchitis virus (IBV), which causes a bronchial disease affecting poultry. The effectiveness of the vaccine has been proven in pre-clinical trials carried out at the Veterinary Institute.

“Our basic concept was to develop the technology and not specifically a vaccine for this kind or that kind of virus,” said Dr. Chen Katz, MIGAL’s biotechnology group leader. “The scientific framework for the vaccine is based on a new protein expression vector, which forms and secretes a chimeric soluble protein that delivers the viral antigen into mucosal tissues by self-activated endocytosis, causing the body to form antibodies against the virus.”

Endocytosis is a cellular process in which substances are brought into a cell by surrounding the material with cell membrane, forming a vesicle containing the ingested material.

“Let’s call it pure luck,” he said. “We decided to choose coronavirus as a model for our system just as a proof of concept for our technology.”

But after scientists sequenced the DNA of the novel coronavirus causing the current worldwide outbreak, the MIGAL researchers examined it and found that the poultry coronavirus has high genetic similarity to the human one, and that it uses the same infection mechanism, which increases the likelihood of achieving an effective human vaccine in a very short period of time, Katz said.

“All we need to do is adjust the system to the new sequence,” he said. “We are in the middle of this process, and hopefully in a few weeks we will have the vaccine in our hands. Yes, in a few weeks, if it all works, we would have a vaccine to prevent coronavirus.”

MIGAL would be responsible for developing the new vaccine, but it would then have to go through a regulatory process, including clinical trials and large-scale production, Katz said.

Akunis said he has instructed his ministry’s director-general to fast-track all approval processes with the goal of bringing the human vaccine to market as quickly as possible.

“Given the urgent global need for a human coronavirus vaccine, we are doing everything we can to accelerate development,” MIGAL CEO David Zigdon said. The vaccine could “achieve safety approval in 90 days,” he said.

It will be an oral vaccine, making it particularly accessible to the general public, Zigdon said.

Whatever you may think of vaccines in general, their development is a long and complicated process, and most mainstream sources state that it takes between 10 to 12 years to have a vaccine approved for public use.

Oddly, these Israelis claim they just so happened to be working on this strain of coronavirus before the outbreak happened, which gave them a ‘head start’ on the competition.  What a coincidence!

They’d like you to think that poultry and human coronaviruses are so ‘similar’ that work on the former can be applied to the latter, which is not necessarily the case because of how specific vaccines have to be.

And they make it sound like they were working on some ‘generic’ template for pulmonary vaccines that could ‘easily’ be modified to other ‘similar’ viruses.  But the reason flu shots allegedly don’t work from season to season is that each year has a new virus and they have to start all over again, and coronavirus would be the same.

Interestingly, a similar article about this vaccine appeared in the Times Of Israel, but that article failed to mention the role that ‘luck’ played in the rapid development of the vaccine, but it did mention that they’d been working on this generic template for 4 years already.

Strangely, this second article makes a rather contradictory claim — that they found the genetic sequence for it online and applied that to their ‘template’.  Which one is it?  Were they already working on COVID-19 or not?

Regardless, this second article also makes the astonishing claim that they may have the vaccine ready in only 90 days from now.

In order to rush this vaccine to market, it surely cannot be tested properly in such a short time, and anyone who takes it is literally taking their lives into their own hands.

Remember the devastation that the Swine Flu vaccine caused?  People got so caught up in the hysteria created by the media that they were willing to take an inadequately manufactured and tested vaccine.

Recall how because of the hysteria generated by the media surrounding polio, the first polio vaccine by Jonas Salk was rushed to market without proper testing, and it actually caused polio in children and had to be quietly withdrawn while falsely claiming ‘victory’ over polio.

And the same very well may happen this time: the normal ‘red tape’ to get this vaccine approved will be waived because of overwhelming public demand and fear, and this new vaccine could end up killing far more people than the cornonavirus ever will.